The deteriorating political and law and order situation in Assam and involvement of political leaders in dividing the society for their personal or party's interest has compelled the citizens to remember a leader, who saved Assam becoming an Islamic state on the eve of India's attaining independence in the year 1947. That was a time when British government conspired to divide the country on religious community basis by creating Hindu and Muslim majority states and leave them quarreling for ever. The present turmoil in the state calls for emergence of a leader like Gopi Nath Bardoloi, who played a vital role in saving Assam becoming an Islamic state more than six decades ago. Had the British Cabinet Mission succeeded in its plan, the history of Assam would have been different one.

The Labour Party government in Britain sent the Mission to explore the possibility of drafting a future Constitution for India in consultation with the Viceroy and the Indian political leaders. The Mission reached India on March 23, 1946 and began discussions with Indian leaders. According to its plan the Union of India would consist of both British India and the Indian states. It arbitrarily divided British India into three groups viz A, B and C. While six Hindu majority provinces of Madras, Bombay, Bihar, Orissa, Central Province and United Province of Agra and Awadh formed group A, Punjab, Sindh, Baluchistan and North West Frontier Provinces in group B. Assam and Bengal were clubbed together in group C. The Cabinet Mission had thorough discussions with the Congress and Muslim League leaders before announcing their plan.

On April 1, 1946 Gopi Nath Bardoloi had an interview with the Mission. He strongly protested inclusion of Assam into group C. He argued Assam was already a province formed on linguistic and cultural basis enjoying provincial autonomy. It should be allowed to continue in the future set-up also as a full-fledged unit, he pleaded. He favoured even separation of Sylhet district from Assam and rejected Mohammed Ali Jinna's demand for Pakistan as absolutely preposterous. The Cabinet Mission stuck to its plan of forming groups.

The Mission's proposal to group Assam with Bengal for creating a predominantly Muslim zone in Eastern India like one proposed to be setup in western India was strongly resented by the people of Assam. According to this plan the Assam representatives to the Constituent Assembly would have to sit in a section with the Bengal representatives to determine the provincial constitution and also a constitution for group C by a simple majority of votes. Except Muslim League, all quarters in Assam protested against this grouping scheme. The Cabinet Mission's announcement of the proposal came out on May 16, 1946. Assam Provincial Congress Committee then in session at Guwahati lodged an emphatic protest with the Congress Working Committee against it. The Asom Jatiya Mahasabha did some secret papers showing the designs of Muslim League in Assam. There began a feverish agitation in Assam to quash the group scheme, which was but the thin end to be driven into the heart of Assam.

On July 16,1946 the Assam Legislative Assembly adopted a resolution moved by the Chief Minister (erstwhile premier) Gopinath Bardoloi himself expressing strong disapproval of the plan and directing ten representatives of Assam to the Constituent Assembly elected by the Provincial Assembly not to sit in section with any other province for devising the Constitution of Assam or any group constitution with such other province for settlement of any question relating to Assam.

The discontent in Assam was based on genuine fears. It was clear once Assam was grouped with Muslim majority Bengal to serve the interest of Muslim community her fate would be sealed . Assam would lose her identity and individuality in the political whirlpool of Muslim India, although Assam was not and had never been a Muslim majority province. Gopinath Bardoloi, who became the chief minister of Assam for the second time in February 1946 and continued to lead his ministry through Independence until his death on August 5, 1950, took best opportunity to express his views on the future Constitution of India and the state of Assam within it when the Cabinet Mission invited him for this purpose in April 1946.

The Congress Working Committee took time in giving a clear and bold lead to Assam on this vital issue. On behalf of Gopinath Bardoloi, Bijoy Chandra Bhagawati and Mahendra Mohan Choudhury called on Gandhiji at Srirampur and placed Assam's case before him seeking his advice and guidance at the critical juncture. Strengthened with blessings of Gandhiji, Gopi Nath Bardoloi succeeded at last in convincing the Indian leaders about the Assam's just case and getting this part of the Cabinet Mission's plan scrapped. Had not Assam opposed the grouping scheme, the formal establishment of Pakistan might have been delayed for a time, but there would have been no Assam left. Gopinath Bardoloi with his farsightedness and sagacity, revolutionary zeal and heroic leadership rescued Assam and her people from the mischievous conspiracy of foreign rulers. Revered by the people as a true patriot and a disciplined Gandhian, Gopinath Bardoloi was a statesman of high stature. He steered Assam through a very crucial phase of its history and saved Assam becoming an Islamic state.

had gopinath bordoloi and

Permalink Submitted by anubhav roy on Wed, 09/05/2018 - 09:48
had gopinath bordoloi and assamese body not give sylhet to Pakistan there would have no linguistic problem in assam. but due to his linguistic chauvinism bengali community who are the genuine inhabitants of barak and sylhet became refugees. but today's assamese intellectuals did not want to discuss the matter. 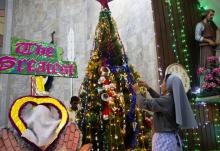 24 Apr 2016 - 11:22am | Rituraj Phukan
The Guwahati Tiger Fest was organized at the Royal Global School to coincide with Earth Day 2016. The Tiger Fest was the culmination of the Sanctuary Asia Aircel Kids For Tigers programme for the...