The meeting was attended by senior journalist, office bearers of the parishad. 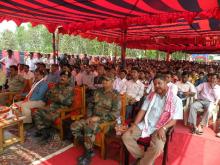 14 Mar 2011 - 3:56am | Jayanta Kumar Das
Thaneswar Malakar,Deputy Commissioner,Udalguri,who has also been known as a state level writer requested people of Udalguri district to work hard for a complete change in the present education system...

23 Mar 2014 - 9:03am | AT News
Its final. AGP has fielded Bijay Krishna Nath in Silchar. That too minutes after the AIUDF leader joined the regional on Saturday night.Nath, the owner of a Bangla daily joined AGO at a brief...

2 Aug 2010 - 12:20pm | Daya Nath Singh
For more than two months the Assam government is puzzled over two TADA case diaries missing from Pan Bazar and Chandmari police stations of Guwahati. Now the case has been entrusted to the state...