Archaeological Survey of India, Guwahati circle, has been trying to take-up the work of repairing of a broken pillar in the Mandap of Hayagriva Madhav Temple at Hajo for a long time. ASI, Guwahati has informed the media through a press note that one of the pillars of ancient temple was broken in three parts due to rusting of the iron dowels holding each other and the other developed cracks due to the same reason and widened more after the earthquake of May 2015. Hayagriva Madhav Temple is a reconstructed temple during the Koch period. The architectural parts of the earlier temple have been used for reconstruction. Different parts of the temple have been used randomly for making the pillars over which the arches are made with brick work in lime mortar over which the stone slab roof was laid, the press note added.

ASI, Guwahati circle has been trying to take up the work of repairing of the pillar in the Mandap of the temple since long. In this connection two expert committee meetings were held for the same in the year 2014 and 2015, but due to non-availability of stone masons, the work could not be taken up. In the first meeting it was decided to completely change the broken parts in 2014, but it would have been a major conservation work and the temple would have to be closed for 3-4 months. Since it would have been major conservation work, it was not acceptable to the Temple Committee.

The second committee was formed to look into the other alternative, proposed that the stone has not moved in the last 30-40 years, therefore the replacing of stone was not required. It recommended that the broken stone should be consolidated by bolting and filling up the voids with stone dust and epoxy-resin. But the work could not be taken up because the masons to come from Odisha did not turn up.

In March 2016, with the posting of new Assistant Superintending Archeological Engineer and his expertise in taking such works in the past in Kolkata circle, helped Guwahati circle to take-up the said work. For this the firm which is taking up the work of conservation of Jagannath Temple at Puri was asked to come and give their suggestion for the same. Manas Kr Panda of firm New Pragati visited Hajo on August 19, 2016 and suggested that the bolting would cause vibration while drilling the stone which would be harmful for the structure. He suggested a few measures to the authorities and some steps have been taken up to prevent further cracks in the affected parts of the pillars, release added.

30 Aug 2007 - 4:39am | BandanBharadwaj
Sivasagar : Army regiment 316 engaged in counter insurgency in Assam, apprehended a Manab Adhikari Sangram Samiti member, Parama Chutia from Nitaypukhuri Namukar for having links with ULFA. He has... 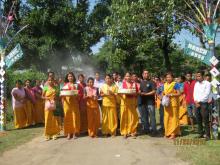