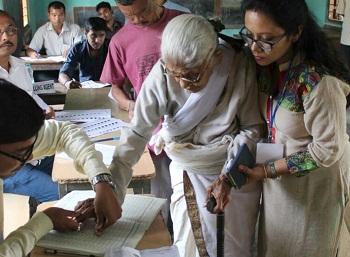 Continuing campaigns for Assam Assembly elections have confused the Assam intellectuals to raise vital issues before the future state legislators and improve the quality of political atmosphere affecting the entire society for quite some time. Almost all political parties have started ‘derogatory’ comments against their rivals for attracting the electorates by their acts and objectives about which they are themselves ignorant. The main reason behind such interpretation is lack of knowledge about the real issues on which the political parties are campaigning. Assam as a state of multi-lingual and religious people continued to be disturbed since the year1979, when several organizations under the leadership of All Assam Students Union (ASSU) started agitation on foreigners’ issue, which continued for long six years. The reasons for the agitation were given as inclusion of the names of foreign nationals in the voter lists and the demand was placed to delete their names from the voter lists. Meanwhile, Assembly elections were also held in the year 1983 despite boycott by the movement organizations. The state remained in ‘coma’ for a long time leaving the poor citizens to bear the brunt of a lengthy agitation.

On 15th August 1985, Assam Accord was signed at New Delhi between the Central government and the movement leaders in presence of erstwhile Prime Minister Rajiv Gandhi. It was decided to stop agitation and form a political party to participate in the electoral process. The Assembly was dissolved and a new political party, Asom Gana Parisad (AGP) came into existence. In December 1985 Assembly elections the AGP came to power defeating Congress Party led by the chief minister Hiteswar Saikia. Interestingly, the disputed voter lists of 1979 remained unchanged and ‘new rulers’ overlooked their earlier demand of deleting foreigners name from the list. The pleasure of power led the ‘young men’ to forget the past.

Asom Gana Parisad (AGP) got an opportunity to rule the state despite their maiden entry into political arena. This term proved for them as learning period. Unfortunately, they lost the next Assembly polls and Congress Party returned to power again. The AGP got a second chance to form a ‘coalition government’, with the help of a few smaller parties including Left, but failed to perform better. The Congress Party returned to power under the leadership of Tarun Gogoi and continued to rule over the state for long fifteen years. ’Fifteen years of confidence and 15 years of development’ became the main slogan for poll campaign of Congress Party this time.

The Central government run by United Progressive Alliance (UPA) for a decade since 2004 provided full financial support to the state without hitch, which led the administration to high level of corruption and misuse of funds. Despite allegations coming to light the blessings of Central government did not find any reason to control the situation. The Centre-State relations till 2014 parliamentary elections were cordial as the Congress party was in power at Centre as well as  the state.

The ‘surprising’ results of 2014 Lok Sabha elections giving huge victory to National Democratic Alliance (NDA) shattered the peaceful relation between Centre and State governments. The complaints of state government during last two years are that the Centre has failed to give sufficient financial support whereas the Central government continued to demand the utilization certificate of the funds given by the earlier Central government. Air is on high that heavy amounts of such funds were ‘utilized’ for managing the influential people including a few intellectuals in order to run the state administration peacefully. May be that is the reason for which the intellectuals are confused and have failed to realize the real issues before the state.

22 Feb 2019 - 11:41am | Suvansu Bora
Golaghat: At least 20 people died and 50 others have been struggling for life in the Kushal Konwar Civil Hospital hours after they consumed illicit liquor at a remote tea garden in Golaghat district...

Nagaland youths roughed up in Gurgaon

16 Oct 2014 - 3:13pm | AT News
Incidents of racist attack on the north east people refuse to die down. Goons in Gurgaon assaulted two youths from Nagaland on Thursday a day after a Manipur student was beaten up by local youths in...

18 Jan 2014 - 1:34pm | AT News
Joonbeel mela ends on Saturday with huge response in Jagiroad. The final day of the grand fair focused the historic meeting of the titular Guva king.The focus on Friday was the...