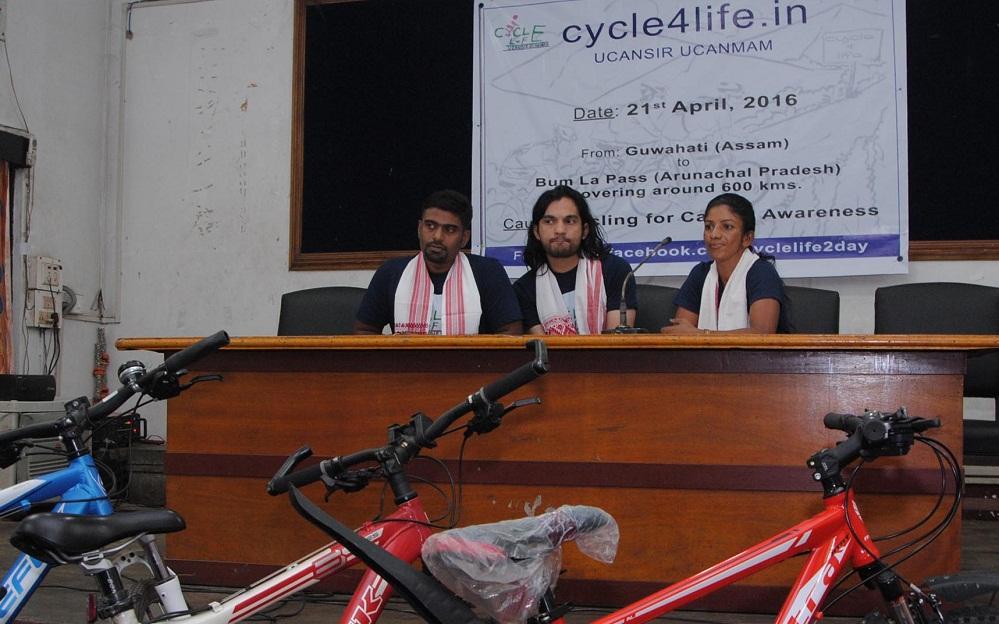 A study conducted by B Boruah Cancer Institute, Guwahati, has revealed that during a decade from 2001-02 to 2011-12, cancer cases in the north-eastern part of the country have gone up from 5,404 to 8,708. A campaign, namely, Cycle 4 ride can help control this dreaded disease. In order to raise awareness to fight cancer a lady, namely, Marcellna Sangma, is going to lead a Biker Mission to 600 kms long stretch from Guwahati to Bum La Pass, near Indo-China border in Arunachal Pradesh. The ride is scheduled to be flagged off by Dr Amar Chandra Kataki, Director, B Boruah Cancer Institute, on April 21, 2016.

Expressing her traumatic experience with cancer, Sangma, who was a cancer patient a decade ago, revealed before the media persons in Guwahati, that she gathered strength and spirit to begin campaign to save humanity from this disease. The operation she went through back in the year 2000 left her with a huge dent on her body resulting in facial palsy. ‘The normal tendency of a girl is to look beautiful and this is sure to leave one depressed’, she wrote on her website, ‘but it could not break my spirit and I am quite happy to get a second chance to live my life for others. I feel quite normal and I am in no way inferior to others’.

Sangma is a fighter, survivor and a promising entrepreneur in the field of information and technology. Joined by Marathoner Jitin Pavithran and campaigner Vaibhav Prasad Desai from Mumbai, during the maiden ride the team of three bikers will interact with local people and government officials on the burning issues and unheard queries from some of the remotest pockets of Assam and Arunachal Pradesh.

14 Jul 2012 - 10:27pm | editor
KMSS leader Akhil Gogoi on Friday demands President’s Rule in Assam to bail out the state from the worsening law and order situation. Talking to reporters, Gogoi said that Guwahati is teeming...

2 Oct 2007 - 5:27pm | editor
A citizens meeting has been convened on October 4 to discuss various Burma issues in the city. Organized by the Journalists' Forum, Assam, the meeting will commence from 2 pm at Guwahati Press...

21 Jul 2020 - 10:54pm | AT News
Guwahati: The Guwahati police claimed to have arrested Deepjyoti Gogoi from Sivasagar charging him maligning the image of the government by sharing a fake page of display where CM Sarbananda Sonowal...