Long awaited North East Graduate Congress, an initiative of Education Research Development Foundation (ERDF) is going to be held from February 26 to 28, 2016. This is the only graduate congress in India being organized by University of Science and Technology, Meghalaya (USTM) in association with RIST and supported by the State Bank of India (SBI). The venue of the congress is the USTM campus at 9th mile, Khanapara.

Addressing the media persons in Guwahati on February 14, 2016, the USTM spokesperson informed that the three days congress is aimed to enhance all round development and bring out the capabilities of future graduates through various life skill processes to bring out  their inherent qualities and expose them to various opportunities. Large number of speakers including reputed authors, scientists and entrepreneurs are likely to grace the event.

The different technical sessions spread over three days will focus on entrepreneurship, soft skills, employability-problems and prospects, competitive examinations, personality development, etc. There will be a panel discussion on ‘Contribution of youth in nation building’. Besides, there will be different competitions like best graduate, dance, song, debate quiz, skit, photography etc, where the youth can participate and represent their respective colleges or institutions. The topic for debate is “Education system in India has failed to produce productive human resources”. There will also be a write up competition on the topic “Is today’s youth are as smarter as their Smart phones”. The write up should not exceed more than 500 words. Laptops, iPods, and cash awards will be given to all the winners, the organizers informed.

The organizers of the event are expecting participation of ten thousand students from all over the north eastern states besides 3500 students of RIST&USTM for which elaborate arrangements have been planned. All the participants will be provided with free accommodation and fooding. Students of all streams of under graduate courses will be eligible to participate, the organizers informed.

1 Mar 2014 - 4:22pm | AT News
AGP is gearing up for Lok Sabha polls amid speculations that the regional party is likely to go it alone in the upcoming polls.The party is understood to have finalized the candidates for 8 seats. Dr... 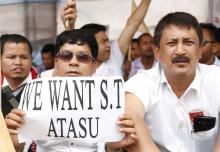 21 Jan 2008 - 3:42pm | editor
The ULFA was planning a huge strike in the city in the run up to the Republic Day celebrations. The insurgent outfit rushed four battalions to strike in the city and the entire operation was to be...