'Gamusa' politics come on fore during festivals only 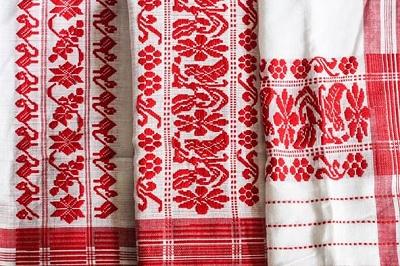 Gamusas and Japis are two important items in Assam, which are in much demand throughout the year in the state especially during festival seasons and social functions. These items are demanded by the people to honor the guests and honorable persons during each and every event.

However, it has been found that throughout the festival seasons the supply of locally woven gamusas are not according to demand by the customers. The reason behind it is said to be heavy cost of the locally produced items. On the other hand the weavers and traders from other parts of the country take advantage of supplying gamusas at cheaper rates and make more profit despite spending heavy cost on transportation of goods and labor charges.

Interestingly, despite much hue and cry not a single section of people comes forward to meet the demand of the market. It is said that the local weavers do not get yarn and other materials for weaving gamusas. The weavers accuse the government for not making arrangement to supply yarn and looms for weaving  sufficient gamusas. It is also complained that the cost of  local products are higher due to heavy labor charges. Complaints are lodged by a number of people against local private suppliers of materials like looms, yarns etc, of charging heavy prices which leads to high cost of production.

On the other hand people complain that such products are coming from Uttar Pradesh and  Southern parts of the country. May be the labor charges are cheaper in other parts of the country, but expenses incurred on packing and transportation also have to be taken in account.

In the present situation it is necessary that local entrepreneurs come forward to get raw materials from sources available and not sit idle that the Central or state government would make the things available. The Central and state governments  have introduced a number of schemes for the young entrepreneurs and it is time for local people to come forward and make the state self sufficient.

It is seen that the people in thousands flock together shouting slogans against the government for providing jobs to the people. These people can play major role to unite and work  together in the interest of the state and self.

29 Jun 2016 - 9:25pm | AT Kokrajhar Bureau
Security forces belogning to police and army from Pakriguri and Padmabil arrested four linkmen of NDFB-S along with arms under Serfanguri PS in Kokrajhar district on Wednesday morning. The linkment...

12 Nov 2013 - 11:20am | AT News
Sonitpur police have rescued Anil Kumar Agrawal 51 day after the Songbijit faction of NDFB kidnapped the NHPC general manager from Bhalukpung area at gunpoint. Sources told assamtimes that the...

3 Jan 2011 - 10:50pm | bishwajeetsinha
The much awaited theatre season is going to kick-start in new year with promising troupe of 'Bordeishila Theatre' at Nagaon Nehru Bali field. The three days show will begin on 4th January'11 with...