Police after investigating against illegal counter running along the check gate which were run by some brokerage, were arrested along the counter no.A 6,191 and 91.
They were identified as Nabin Das, Aprail Hasda, Bassu Goyary, Sujit Paul, Dipen Barman, Sunil Roy and Rupon Bakshi.

22 Apr 2008 - 3:02am | editor
Altogether five people died and ten others have been injured when a Tezpur bound bus collided its head on a moving truck near Roha in Nagaon district today.According to information, the accident took... 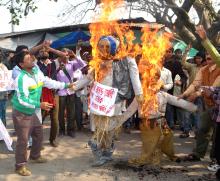 6 Feb 2015 - 8:12pm | AT News
The ‘immigrant’ tag seems to monger no less trouble for BJP in the run up to the Delhi assembly polls. Assam police have booked BJP’s chief ministerial candidate Kiran Bedi along with three others...