With the joining main stream of the nation by more than three hundred ULFBV militants at the end of September last, the situation on the borders of Assam and Mizoram is likely to be peaceful. The efforts of the Hailakandi district administration and other agencies have done a commendable job to bring the militants on the right path. The situation on the inter-state borders of the southern Assam and Tripura's northern part with Mizoram was explosive for a long time after the Reangs tribal began their struggle for identity and existence, when they were driven out of Mizoram by the activists of Mizo Students Association (MSA) and Mizo Zirai Pawl (MZP). This led the Reangs to shift their activities on the borders of these states adjoining Mizoram. A number of refugee camps were established in the state of Tripura. Negotiations between the governnments of Tripura and Mizoram took long time to finalize the issue of Reang refugees' rehabilitation within Mizoram, but an amicable solution to the issue did not come out. The result was the increasing illegal activities of the Reangs on the border areas with Assam.

In the meantime, the Reangs formed a militant organization on the style of United Liberation Front of Assam (ULFA), in the name of United Liberation Front of Barak Valley (ULFBV), to get their demands fulfilled. This organization was formed in the year 2001 and its area of operation was the districts of Hailakandi and Karimganj of Assam. They had started looting, kidnapping of businessmen for ransom. The aims and objectives of the ULFBV were to protect the Reang community and safeguard the interest of the community against the atrocities of the Mizos and the Muslims.

The organization also demanded a separate Zila Parishad for the tribal community in the Barak Valley. The Reangs demanded the restoration of land to the tribal people.

Among their various demands was also demand for payment of ex-gratia to their activists who lost their lives. Their demand included general amnesty and peace negotiation process to be done at the ministry level in presence of Central home ministry representative.

The ULFBV declared unilateral cease-fire with effect from 7th June 2008, with a view to solve their problems through negotiations with the government. Their cadres surrendered on 30th September 2008 at a function held at Guwahati and deposited large number of arms and ammunition at the time of joining the main stream.

It may be mentioned here that ever since the Reangs, the minority community in Mizoram raised their voice for an autonomous council for themselves under the Sixth Schedule of the Constitution of India and re-entry of deleted names in the electoral rolls, they were subjected to unbearable oppressions by the MSA and MZP. The predicament of the Reangs began long ago when Mizos compelled them to get converted to Christianity. Although a number of them succumbed to such pressure, it did not improve their status. About sixty percent of them had been converted and forced to accept Mizo names and language as medium of education. Their culture practices were obstructed and they found their identity being threatened by the Mizos. About twenty thousand Reangs were alleged to have deprived of their rights to franchise through deleting their names from the voters list of Mizoram.

Permalink Submitted by abhijit acharjee on Fri, 10/10/2008 - 17:30
The Reangs & the other inhabitants of Tripura, both Bengalis and Tripuris, have shared a long history of coexistence for centuries since the first dispersed from their original home land in the Chittagong hills in Bangladesh. The present state of deprivation that they are going through is therefore indeed lamentable. It is also to be noticed that not much serious effort has been made to under take an academic inquiry in the the socio-politico-economic condition of this dislocated ethnic community. I am presently pursuing my MA from Jadavpur university and Harbour interests in the field of diaspora studies and I wish to take up the immigration history of the Reang community as an area of research. I am desperately in need of help from people who have some experience in this regard.any kid of help is most welcome. My email id: abhiacharjee@gmail.com

14 Jul 2014 - 10:43am | AT News
After egg, betel leaf, fish and meat, now it’s the cartel of cashew nuts that makes the fruit more dearer for common people these days. Some sensational revelations have come out during the... 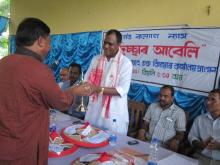 Financial aids for poor and sick students at Kalaigaon

30 Jun 2013 - 8:14pm | Jayanta Kumar Das
In a noble and unique attempt to share feelings and emotion of poor and sick students and to encourage them to move forward in their daily struggle, members of a Kalaigaon based organisation...