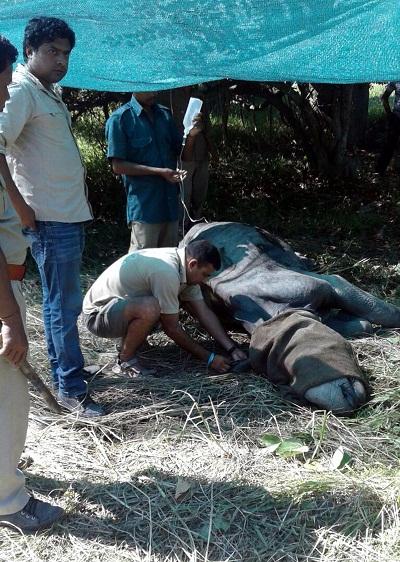 An ideal habitat for the breeding of rhinos, Kaziranga has seen a rise in the number of the species. The animal shrugged off its ‘endangered’ tag as soon as its population crossed the 2000 mark. This fuelled an overweening strategy--the much hyped Indian Rhino Vision -- that targeted 3,000 rhinos by the year 2020 in the rhino-bearing sanctuaries of Assam. However, with the number of this pre-historic pachyderm crossing the 2,500 mark, a host of challenges also came to the fore, poaching being only one of the concerns. Kaziranga has been plagued by other challenges like-- shrinking of the habitat, encroachment of the corridors around the Park, siltation of the water bodies and a complete lack of protection of the watershed of Kaziranga. The conservation of rhinos in Kaziranga started almost 110 years ago but conservation seems more in jeopardy now than it was a century back! With the growth of wild life population as well as the ever swelling human habitations in and around the Park, it has become a daunting task to meet these challenges without proper advisory and practice.

Instead of dealing with the long-term conservation challenges and preservation of this unique site, the Indian Rhino Vision only went on pulling out rhinos from Kaziranga and Pobitora for translocation solely keeping in view the magic figure of 3,000 rhinos by 2020. Manas National Park, another World Heritage Site and Laokhowa and Burhachapori Wildlife Sanctuaries remained preferred destinations for the translocation of rhinos under the IRV 2020 initiative. However, translocation to these wildlife areas remains a daunting task as these sanctuaries continue to be vulnerable. Rhinos were falling prey to poachers and the slaughter and maiming of the species continued unabated. Poaching of even trans-located rhinos overshadowed the whole IRV process.

Started on April 12, 2008, IRV's translocation process came under the scanner after more than half of the trans-located rhinos to Manas fall prey to the bullets of poachers. Without adequate patrolling staff, it was a colossal task for a few people to constantly guard the animals against human rapacity. The killing of these trans-located animals since 2011 in Manas World Heritage Site triggered the World Heritage Committee to send an alarm to the state that further deterioration of protection in Manas and subsequent damage caused to key attributes in Manas may lead to de-listing Manas from the World Heritage Site list.

Even after the debacle at Manas, the IRV stakeholders did not seem to learn the basics: to tighten up the protective mechanism in the sanctuaries that are soft targets for the poachers. They even went on for a temporary band-aid effort of "trimming" horns on rhinos to be trans-located to Burhachapori and also on stray rhinos. The decision, taken at the IRV 2020 partners meeting on January 30, 2014 at the Assam State Zoo was met with strong opposition from conservationists and the state forest department was compelled to abandon the idea.

Conservationists were of the view that security assessment is a must for translocation. The Assam Environment NGO Forum said—“If the government is unsure of the security in the targeted area, in this case Laokhowa and Burhachpori Wildlife Sanctuary, then translocation should be postponed till such time as the government is confident of its security apparatus.” But the stakeholders of IRV went on with their program of translocation and sent a mother rhino with its calf to the Boma (enclosure barricaded with thorny bushes and electric fence) in Burhachapori “to ensure success of translocation” that instead became the death knell for the duo.

An official of the Assam forest department, on conditions of anonymity, said, “Rhinos endure a certain amount of stress during the translocation process. It was a terrible sight-- when after regaining consciousness-- the mother rhino wounded itself with multiple injuries each time it stumbled on the thorny barrier in the effort to free itself from captivity. Further, the mother suffered a grave cut in the ear during notching, that turned septic and the animal died a slow and painful death last March. The orphaned calf was alone since March. The trauma the calf suffered after the ordeal it had gone through during the recent floods coupled with serious stomach ailments finally brought the end to the poor animal.” The rhino calf died.

The death of the rhinos in Burhachapori has become a huge setback for the IRV 2020 programme. There were allegations that the IRV stakeholders simply washed off their hands once translocation process was over; they were never bothered about the safety of the trans-located animals. This was indeed a grave allegation. The death of rhinos not only contradicts the conservation efforts but undoubtedly overshadowed the whole IRV process.

After the debacle at Burhachapori, many conservation NGOs of the state were seen protesting against the translocation programme of IRV. They held responsible the IRV stakeholders—Assam Forest Department, The Bodoland Territorial Council, International Rhino Foundation, US Fish and Wildlife Service and WWF--- for the death of at least 13 rhinos--those trans-located from Kaziranga and Pobitora. Kaziranga Wildlife Society, Early Birds, Aranya Suraksha Samity, Green Guard, The Green Society and Centre for Conservation, Education and Research demanded the forest department to stop the translocation process at once. The NGOs allege that translocation was carried out without prior and proper security arrangement of the targeted area. There were also severe allegations of negligence towards security and health monitoring of the animals. The NGOs further demanded the government to institute an inquiry into the death of all trans-located rhinos and at once make public the post mortem report of the female rhino died in the ‘Boma’ in Burhachapori last March.

Several student organizations including the Asom Jatiyatabadi Yuva Chatra Parishad also came out to voice their concern against killing of rhinos in the name of “translocation” under Indian Rhino Vision 2020---a policy that misfired!

It's shocking that these

Permalink Submitted by Angelica Ibbotson on Thu, 19/01/2017 - 15:27
It's shocking that these rhinos are dying in the name of conservation, surely there has to be a better way to tackle the problem than this? At the same time, in Kaziranga National Park, tribal people are being extra-judicially executed and tortured, also in the name of conservation. Last year a 7 year old tribal boy was shot by park guards who have immunity to prosecution from firearms offences and are under pressure from the authorities to show they are stopping poaching by killing "poachers". This results in 'fake encounters' where innocent tribal people have been lured into the forest and killed. Not only are these gross human rights violations, it's also disastrous for conservation – if the people were arrested, rather than killed, the masterminds behind the poaching can be caught and stopped (often criminals conspiring with corrupt officials) and the innocent can be released. For more info about Kaziranga see here: http://www.survivalinternational.org/news/11522

2 Jan 2016 - 10:44am | AT News
Assam Chief Minister Tarun Gogoi is confident that Congress will retain power for the fourth consecutive term. He his government and party are well prepared to beat the heat of anti incumbency in the...

Chittaranhjan Choudhury of Barpeta no more

25 Jan 2017 - 11:12am | AT News
Amid a massive security arrangement and rebel boycott call, Assam is all set to join the Republic Day on Thursday to mark beginning of the largest democracy on the planet.The flag hosting grounds...