To facilitate the children of Dima Hasao, a backward district of the State of Assam to experience rich cultural heritage and custom of country and also to give exposure to children with a message for peace and development of the country, the Army has organised an excursion trip to Kolkata, Pune & Hyderabad for school children of NC Hills (Assam)

17 Jun 2014 - 11:49am | AT News
Health minister Dr Himanta Biswa Sarma has reposed his confidence on Tarun Gogoi as Chief Minister. Addressing a press conference in Guwahati on Monday,  Dr Sarma who led the dissident... 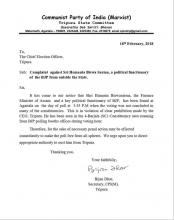 NCSC session at Udalguri on Sep 14

1 Sep 2016 - 8:25pm | Jayanta Kumar Das
The National Children’s Science Congress (NCSC) Udalguri district will be held on September 14 at Golmagaon High School at Udalguri. This has been stated by Sadhana Hojai,DC,Udalguri who is...