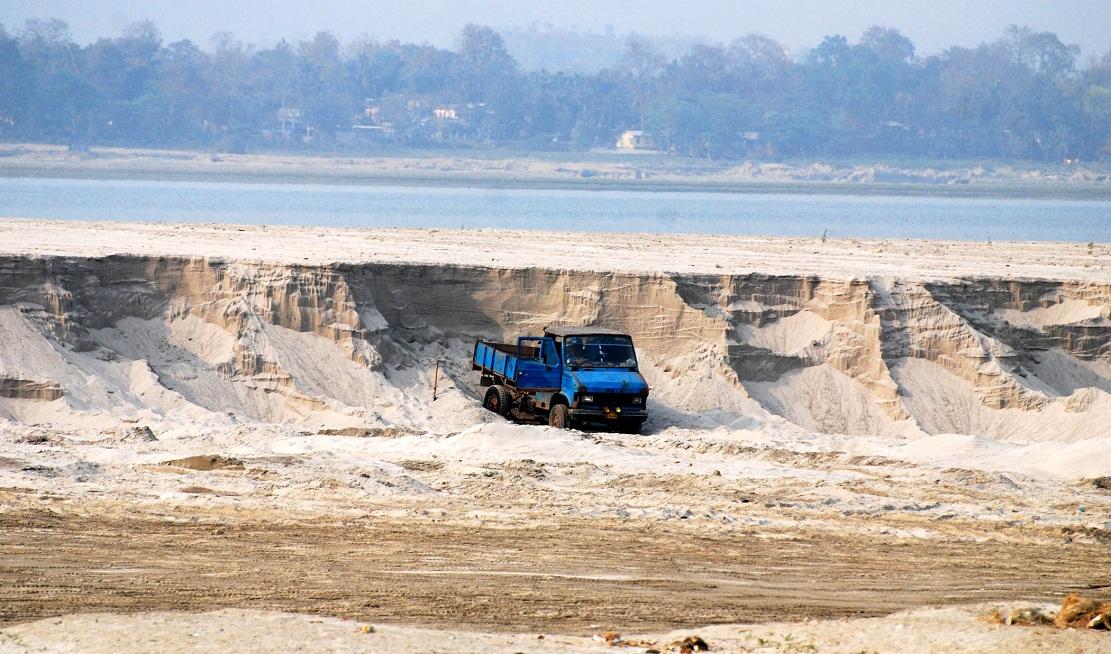 That the Brahmaputra is drying up is no more a hype. The water line of the river is fast receding throughout its course in the entire Brahmaputra valley. According to information available from the Central Water Commission (CWC), the water level of the mighty river, known to be the lifeline of Assam, has reduced in an unprecedented manner this winter.

“The water level of the Brahmaputra has reduced to 101.78 metres in the last week of December (2014), which is the lowest water level of the river so far. This decreasing trend is likely to continue till March,” an official of the commission said. As per information available from the commission, the water level of Brahmaputra in Dibrugarh in upper Assam continues to reduce from one to two centimeters every day since November last year. Water levels decreased to such an extent that ferries are seen anchoring five kilometers inside usual stopovers in Dibrugarh. Further, there has been regular interruption to ferry services. Those dependent on the river for drinking and daily chores are walking miles on the sand.

Playing cricket or a kite festival on the sandbars of the mighty river in Guwahati are new trends coinciding with the dry spell. However, this year the city has been witness to something it has never seen before. The water level receded to such an extent that the water measuring line was laid bare and was seen gaping at the receding waters from a distance!

J N Sarma, professor of Applied Geology in Dibrugarh University, said that the average temperature in the region has increased by 0.88 0 celsius and a reason behind this unprecedented drying of the river. The warming has caused glacial retreat and permafrost melting as well as drainage and degradation of numerous lakes and wetlands that feed the region’s rivers. It has also affected precipitation patterns and boosted evaporation rates, resulting in reduced flow of water to the river.

Brahmaputra is the only river in the world which receives more than 30 tributaries throughout its course. These tributaries transform the Brahmaputra into much bigger size towards its downstream. While Subansiri, Ranganadi, Buroi, Dikrong, Borgong, Jiabharali, Dhansiri (north), Manas, Puthimari, Aie, Sankosh and Beki  are the main tributaries on the north—the Noadehing, Buridehing, Dikhow, Disang, Bhogdoi, Dhansiri (south), Kopili, Kulsi, Krishnai, Dudhnoi, Janjirana, are the main tributaries on the South Bank of the river. Further, in Assam a large number of tributaries originating from the Lower range of Himalayas, Nagaland hill, Patkai range and Meghalaya join the Brahmaputra after traversing through the basin. All these tributaries in the Brahmaputra valley are rain fed while the Brahmaputra is fed by glacial melt water at its source. However, the rise in temperature due to climate change tends to change the snow and glacier covers of the Himalayas and subsequently change the flow scenarios of the river. Several studies conducted in India and abroad also opined that climate change may have significant impact on the flow of the Brahmaputra. The monsoon flow of the river may increase while the lean period flow may decrease.

In the recent years the drying up of this mighty river and its tributaries during the dry spell created much apprehension in the entire Brahmaputra valley as millions of people are dependent on the river. Noteworthy to mention, the river and its tributaries also feed thousands of wetlands, streams and rivulets in the entire valley. The apprehension that the river is drying up has been concluded based on the minimum flow of the river during the dry period or “basic flow” in technical terms. (Maximum flow of a river is assessed during the rainy season and its minimum o r basic flow is assessed during the dry season).

The Water Resources Department, Assam, suggests that the river enjoy a comparatively good health as regards to its lean period flow considering the discharge related data for the last 30 years, on the other hand there has been widespread concern as scientists already predicted a possibility of the climate change phenomenon affecting the base flow of the river.

Dikrong and Ranganadi—in Lakhimpur district has been completely transformed into grazing grounds during the dry spell as there has been no trace of water left in these two major tributaries of the Brahmaputra. With the drying up of Dikrong and Ranganadi ---largely attributed to the 405 MW Ranganadi Hydroelectric Project that significantly impacted the geography and environment of the region-- there has been ample scope to point the needle towards upstream interventions (damming and water diversion from the Brahmaputra) that might be the cause of the water level decrease in Brahmaputra and its tributaries. However, considering the unprecedented receding water levels of the Brahmaputra during the dry season, the impact of climate change on the flow of the river cannot be ignored.

The Brahmaputra is a highly active river in a geo-dynamically potent area known for its biological and cultural diversity in the Eastern Himalayan region. As such a field level study of the situation as to what is the actual cause or what is contributing to the decrease in the water level of the mighty river is of utmost importance. A European Commission-sponsored project earlier showed the Brahmaputra discharge at risk of 15 per cent to 25 per cent reduction by the end of this century. The project that studied the monsoon discharge and base flow of the river concludes that while most of the monsoon discharge of the river is generated from the precipitation taking place in the northeastern Indian basin of the river, the base flow of the river is dependent on the glacial melt at the source. Hence in the event of climate-change –induced glacial melt, the flow scenario is at risk.

Much of the precipitation in India, about 85%, is received during summer months through monsoons in the Himalayan catchments of the Ganges-Brahmaputra-Meghna (GBM) basin. The northeastern region of the country receives heavy precipitation, in comparison with the northwestern, western and southern parts. The uncertainty of start date of monsoons, sometimes marked by prolonged dry spells and fluctuations in seasonal and annual rainfall is a serious problem for the country. On the other hand decrease in winter precipitation over the Indian subcontinent will only increase water stress in lean season. The Assam State Action Plan on Climate Change (2013—2017) also predicts extreme weather conditions to increase.

According to Dr Yong Yang, scientist from Hengduan Mountain Research Institute and Deputy Director of Expert Committee of China Foundation for desertification Control, the Jima Yangzon glacier—the primary source of the Brahmaputra is receding fast and the Jima Yangzong area at 5,500 metres has decreased substantially over the last few years. Rapid melting of the glaciers in the Himalayan region would first increase the volume of water in rivers that will lead to widespread flooding and then subsequently within a few decades the water level in rivers will decline. These symptoms are already evident in the Brahmaputra.

Along with the drying and dying of rivers, another disturbing trend has emerged—the degradation of wetlands. Nature’s Foster, an NGO, during its Asian Waterfowl Census of 2014 in the wetlands of western Assam (taken under the Bombay Natural History Society) found that there are no traces left of many of the existing wetlands in the area. The NGO had attributed the disappearance of these wetlands to climate change. It is interesting to note that swampy areas in the national parks and sanctuaries in Assam are also on the decline. This is unprecedented in Assam—relatively less hilly than the other northeastern states—a plain with two major river valley system that fed numerous natural wetlands like lakes, marshes, waterholes, streams and rivulets many of which retain water throughout the year supporting a healthy aquatic ecosystem and hosting a number of water birds, both resident and migratory.

The Brahmaputra valley is fed by the Brahmaputra, dominated by the Brahmaputra and kept alive by the Brahmaputra. At least 300,000 hectares of water bodies supply 216 species of fish. Not less than 500,000 people are actively engaged in fishery. If the climatic predictions that say ‘extreme weather conditions to increase’ are “confirmed” then surely climate change is going to impact not only our forest ecosystems, but the river and wetland ecosystems heavily. The thrust should be on adaptation strategies, but we are simply not ready. In case of Assam, a state fighting with so many natural oddities, the state’s action taken report on climate change is still to incorporate these aspects!

Mighty Brahmaputra is in

Permalink Submitted by Ratul Goswami on Thu, 03/12/2015 - 15:30
Mighty Brahmaputra is in danger because of construction of Big Hydel projects and if it continues this will not take much time to get dry.Now it is the high time to prevant from further damage to the river Brahmaputra .It is the central Government to initiate positive autmosphere for dialogue with China.

13 Jun 2012 - 11:26pm | editor
A high-level meeting between Assam and Nagaland that took place in Wokha district decided to ease the prevailing tension in Merapani where three houses were burnt. Deputy Commissioners and senior...