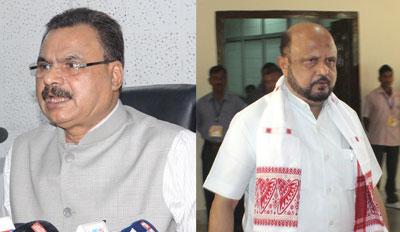 Till the other days they were AGP leaders which came to power since they signed the historic Assam Accord in Delhi. We are talking of Prafulla Kumar Mahanta and his one time cabinet colleague Chandra Mohan Patowary. Mahanta is still the regional party holding the same view on the Bangladeshi immigrant issue. Still he wants the immigrants irrespective of their religious beliefs be detected and deported from the soil of Assam. This is very simple.

But his one time acolyte and cabinet collages has turned a political bete noire on the floor of the Assam Assembly which resumed its budget session on Monday. Both they targeted each others with facts and figures. The verbal duel started as soon as Mahanta wanted to know Dispur’s position on the move to accord refugee status to the Hindu Bangladeshis. Mahanta said that the move will leave an extra burden on Assam where lakhs of Hindu Bangladeshi nationals will try to settle in the state.

Mahanta said,”"there are 1.72 crore Hindus in Bangladesh and will India ask Bangladesh to give security to them? Will the state government tell the Centre to implement the Assam Accord, because only this will solve the problem?”

Then Patowary said it would depend on the neighbouring country to ensure their protection. He said, “"the (bill to amend) Citizenship Act has been brought in Parliament, but it is not passed yet. So there is no point talking about it.”

Patowary further said the notification was for pan-India and there is no question of burdening Assam with minority immigrants. Mahanta countered by saying,” “all come illegally. What will happen to them and what is your step? According to us, Assam Accord is the only solution and so will the state government ask the Centre for its speedy implementation?"

Patowary who got angry with Mahanta and started criticising his former president for posing the same questions. “He is not trying to understand," said Patowary.

Mahanta said, "I know all these that is why, I have asked it against and again. The immigration problem is very serious and will Assam government tell the Centre about this? So stop making such statements."

28 Nov 2018 - 6:13pm | AT News
Guwahati: The Centre for North East Studies and Policy Research (C-NES) organized a panel discussion on ‘Assamese Sikhs in Transition’ a research project which has been prepared in collaboration... 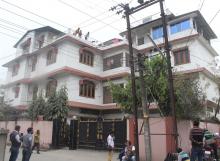 14 Feb 2018 - 12:00pm | AT News
GUWAHATI: Assam Chief Minister’s anti corruption and vigilance cell conducted a raid at the residence of a senior forest officer in Guwahati on Wednesday. The sleuths reached the residence of...

9 Aug 2014 - 10:12am | AT News
A tiny hamlet in Teok area draws the attention the entire country. The abode of 388 families in Jorhat will receive a rare honour at the Independence Day function at Kachari Maidam in Jorhat...