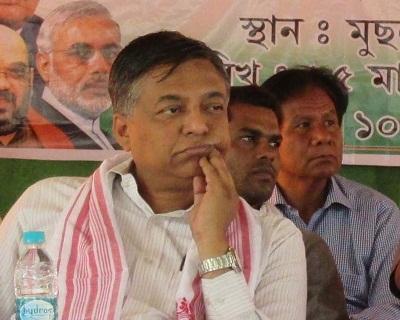 Bhattacharya is believed to have sought the extention in view of the assembly polls. Dr Himanta Biswa Sarma who is also learnt to have urged the central leadership to retain Bhattacharya as the state unit president triggering stiff resistance from many senior leaders including a few sitting MPs and MLAs.

A cricle of senior leaders and MPs has already apprised the central leadership of the possible adverse impact in the polls if Bhattacharya is allowed to continue the post. They have told the leadership that the party would have to pay the heavy price under Bhattacharya’s leadership. The Central leadership want Sarbananda Sonowal to replace Bhattacharya. But a senior party leader who refused to be named told Assam Times that the Union minister is not at all interested to accept the offer.

“He is not happpy with the state of affairs in the state unit. That’s why, he is least interested to take the rein. Then he will have to quit as Union minister,” said the senior BJP leader. “Definitely, if BJP president asks him to go and take over as state unit president Sonowal has no option but to do so. But he is not interested,” he said.

6 Apr 2014 - 11:31pm | Hantigiri Narzary
The central observer (General), Rajesh Kumar Sinha, IAS for No. 5 Kokrajhar HPC (ST) visited the 31-Sidli (ST) LAC segment and held a meeting with the officers engaged in different cells under the...

18 Mar 2018 - 11:14am | Akshaya Pranab Kalita
Namrup: Preparations are afoot for holding the All Assam Biennial Kalita Janagusthi Conference in Guwahati from March 24. The two days summit is holding at the Bir Bhagadutta Kshetra Narengi...