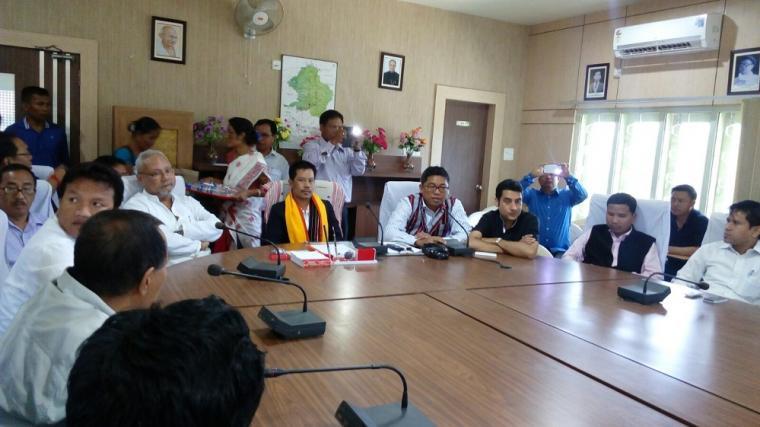 Former DHD-J militants seem to have been dominating the pre poll political landscape in Dima Hasao district of Assam much to a major concern for the common people.

The former militants, mostly, belong to BJP who are going to form the executive body of the Dima Hasao Autonomus Council in a day or two. A few others are  believed to have been contemplating to join the party six months ahead of the assembly polls.

Immediately after joining the mainstream, they contested the council polls independently promising a lot in 2013. But they have been failing to deliver the goods.
These former militants, moslty, have of late, joined BJP at the full initiative of a former powerful Congress minister. Now these former miitants are expected to take oath as executive members of the council.

Out of eight former DHD-J militants, 7 have joined BJP while another still remains independent. They include Niranjan Hojai, who is the chief executive member of the autonmous council. Others are Jewel Gorlosa, Subrota Thaosen, Debolal Gorlosa,Thaisodao Thaosen, Amendu Hojai & Biswajit Daolagupu. The lone independent member of the council is Debojit Bathari.

In 2013, BJP won a single seat and despite assurance from these elected members the party refused to form the council citing horse trading. But the same party has formed the council after the fomer militants joined the party.

23 Jul 2021 - 9:37am | AT Kokrajhar Bureau
Family members of NLFB leader M Batha have expressed their happiness because M Batha and other members of the militant outfit returned to the mainstream on Thursday M Batha is originally from...

Why AIUDF, AAP keep emerging?
Mahanta vs Patowary
Cong list to be announced on March 16
Kidney Day observed at Dispur Hospital
More blows for AGP; another MLA to resign
Vertical split in Assam BJP over president
Revolt in Dima Hasao BJP
What Badaruddin talks to Gogoi
Devananda Konwar to join AIUDF!
Dutta gets tougher with dissidents