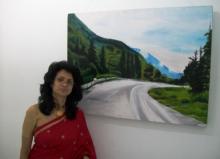 29 Sep 2010 - 2:30pm | ShamimAlamHaque
An art exhibition by Arundhati Choudhury titled 'Miles 2 Go' attracted a number of commoners including quintessential celebrities and art lovers of the city. The event was inaugurated by Gyanpitha...

10 Mar 2014 - 8:19pm | AT News
A wildfire atop a hillock seems to have been posing a serious threat to huge area in the outskirt of Guwahati these days.Panic starts gripping the local residents in North Guwahati after the outbreak...

30 Aug 2015 - 12:14pm | HK Roy
Incessant rain for the last couple of days has paralyzed life in Pasighat and adjoining areas. Hilly rivers and streams are seen overflowing and posing a threat to road communication, paddy fields,...