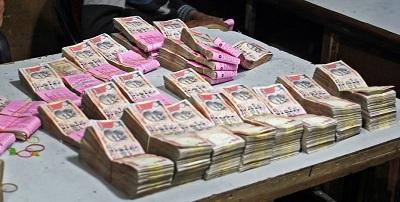 In a bizarre incident that triggers statewide anger and surprise, the police have arrested a top ranked officer in Dispur on bribery charges on Tuesday before recovering more than Rs 1 crore from his possession.

He is none other than Kujendra Doley, the irrigation secretary who alleged to have been collecting lakhs of rupees from the contractors for releasing their bills.

Acting on a complaint from a contractor, the sleuths of the vigilance and anti corruption cell caught the secretary red handed and seized an astronomical amount of money from his office locker he allegedly to pay minister Ranjit Dutta.

Then Doley was taken to his residence in the city and Rs 10 lakh were seized in cash during the raid. This has simply proved, beyond doubt, the meaning less crusade against corruption in Dispur.

27 Dec 2014 - 11:23am | AT News
A critical approach on history came up for a livelier discussion when a panel of experts had a brainstorming session as part of the Guwahati Lit Fest on Saturday.Noted expert and former JNU professor...

16 Feb 2010 - 9:14pm | editor
This music institute created quite a buzz in Bangalore in 2009, by being the groundbreaking “First Registered Music Institute to be commenced by an Assamese”. With the festive spirits...

22 Jul 2007 - 8:49am | editor
Burapahar: Some unknown miscreants have hijacked a bus at Burapahar in Assam. The miscreants hijacked the bus at gun point from the Burapahar area in the National Highway 37. The passengers were...