Amid an escalating controversy over beef consumption, yet another leader has quit BJP in Meghalaya suggesting a setback for the saffron party in the pre poll political landscape.

North Garo Hills BJP president Bachu Marak pulled out of the party after the national party spokesman Nolin Kohli warned him against a beef party in Tura to celebrate the three years of the NDA government at the Centre.

Marak, who pulled many people to BJP in the Congress ruled state rued in his resignation letter to state party president Sjibun Lyngdoh made it plain and simple that he would never go against the sentiment of the  Garo people for whom beef is an inevitable item at any feast.

He said,”I cannot compromise on the sentiments of the Garos. As a Garo it is my responsibility to protect the interest of my community. Beef eating is part of our culture and tradition. The BJP’s non-secular ideology to impose on us is not

Bachu, who had pulled out of the party is organising a beef party in Tura on June 10. He is the second BJP leader to have resigned over the boiling beef controversy.

Last week Baernard Marak left the party on the sane ground saying that he won't hurt the sentiment of the Garos. 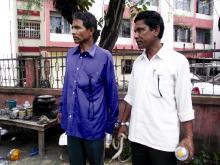 22 Jun 2012 - 12:06am | Mubina Akhtar
While policy makers, experts , activists are converging on Rio for the UN conference Rio + 20 thousands of miles away in Assam (India)—22 farmers are languishing in the Lakhimpur jail for...

12 Dec 2017 - 2:56pm | AT News
GUWAHATI: The Income Tax department conducted a raid at the residence of Mahabir Jain in three places in the city of Guwahati on Tuesday. Over 200 IT officials and policemen reached the residence of...

30 Oct 2013 - 9:25am | AT News
Three persons were killed and atleast 20 others have been injured when a passenger bus collided its head on a tanker in Nagaon district. The incident took place on the National Highway 37 in Roha at...