22 Sep 2012 - 3:40am | editor
Surging waters of the Brahmaputra have again threaten to ravage the Kaziranga National Park and Dibru Saikhowa National Park in Tinsukia. Another worst hit area is the river island Majuli in Jorhat... 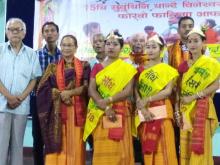 23 Jul 2016 - 2:31pm | SK Hasan
Forest officials in Sivasagar district captured a leopard which has been creating a reign of terror at a tea garden area in Geleky. Acting on the complaints of the local residents in the Modi Tea...