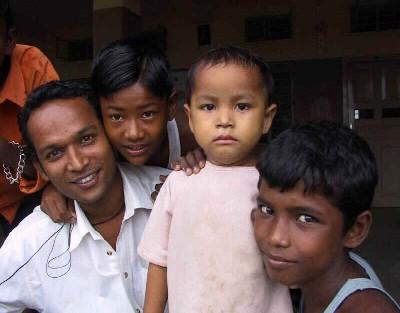 Seven years ago from now eight street children were picked up from Guwahati Railway Station by a noble person dedicated to the service of humanity. These children were rehabilitated in a hut in Dhirenpara locality of the city. This rehabilitation centre named 'Snehalaya' (House of affection) became operational on January1, 2001. 'Snehalaya' is an out-reach programme of the Don Bosco Educational Society for rehabilitation of children in need of care and protection.

With the motto 'to take them off the street and put them on their feet', Fr Lukose Cheruvalel, SDB, the Founder Director of Snehalaya started living with those children. He was loved by the children by the core of their heart. At present the number of Snehalaya in Guwahati city are five, extending fully free residential care to about 200 destitute children. Besides, it has also non-residential programme assisting another 150 children with education, day-care and psycho-social support.

Recently, Snehalaya observed its Annual Day, which was graced by the presence of the Vice Chancellor of Gauhati University, Dr Amarjyoti Choudhury as chief guest. Many eminent friends of Snehalaya attended the function. The children of Snehalaya presented songs, dances and one act play, which were lauded by the audiences. One act play Ghar written by Naren Patgiri and directed by Abinash Sarma presented by the children moved the gathering, as it was based on the tragic and bitter experiences of the children. 'Broken Homes break the lives of children' was the message of the play.

A book of short stories in Assamese 'Mon Moor Kande Re' based on the case histories of the children of Snehalaya written by Baby Bhuyan, noted short story writer was also released during the function.

9 Oct 2015 - 7:44pm | AT News
Assam Chief Minister Tarun Gogoi reiterated his request to Prime Minister Narendra Modi to restore the Special Category Status for the north-eastern states although the process is believed to have...

7 Jul 2012 - 12:48am | editor
Police on Friday arrested two poachers in connection with the recent killing of a rhino in the Pobitora Wildlife Sanctuary in Morigaon district. According to police, the duo were arrested from...