The North East Election watch, a part of National Election Watch (NEW) has been monitoring the candidates for 2009 Urban Local Body elections to be held on July 31 next, covering 70 number of town committees and municipal boards of Assam.

In these Urban Local body Elections, total 673 wards of the states will face elections where 29 constituencies are reserved for SC, 34 for SC women, 5 for ST, 5 for ST women and 212 wards for general women.

The Supreme Court of India has declared through its verdict dated March 13, 2003 that “It is essential by law to provide that a candidate seeking election shall furnish the details of all his assets (movable and immoveable) possessed by him or her, wife-husband, dependent relations, duly supported by an affidavit.

The verdict also reads that “It was suggested that inasmuch as charges were framed by a court on the basis of the material placed before it by the prosecution including the material disclosed by the charge-sheet, providing for disqualification on the ground of framing of the charge-sheet would be neither unjust nor unreasonable or arbitrary.”

It also pointed out that ‘People are generally lured to enter politics of contest elections for getting rich overnight. Before allowing people to enter public life the public has a right to know the antecedents of such persons.’

On the basis of the landmark judgment, though the State Election Commission of Assam has made declaration of Assets, Liabilities, Criminal records and Educational background mandatory for the candidates of Urban Local Body, however, the Commission did not take necessary steps to bring the information into the public domain by unloading this information into their website for easy access of the citizens.

With sheer difficulties, NEEW volunteers collected the photocopies of the affidavits of ULB election candidates of Jorhat, Golaghat and Lakhimpur districts of Assam and carried out systematic analysis of these for the voters of these constituencies.

The highlights of such information are as below:

Total 338 candidates are covered in this analysis from Jorhat, Golaghat, and Lakhimpur districts of Assam. Candidates from nine town committees and four municipal boards’ elections are covered here. Total three criminals are conte4sting in these constituencies and all are from Congress party. The age group of 31-40 is dominating the list with 113 candidates from this age group followed by 41-50 age groups with 100 candidates. Two candidates are more than 71 years of age. Eighty two percent candidates do not have PAN numbers. One hundred Lakhpaties are contesting the election from these constituencies where Ashok Kumar Malpani tops the list with more than a crore assets. Nine of these candidates have declared Zero assets.

25 Mar 2014 - 12:58pm | AT News
Chief Minister Tarun Gogoi claimed that the ruling party is sure of ten seats in the upcoming Lok Sabha polls.Addressing a press conference in Guwahati on Tuesday, Gogoi said that nobody can stop... 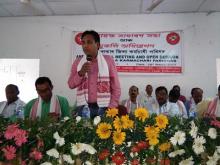 29 Mar 2017 - 9:21pm | AT Kokrajhar Bureau
The annual general meeting the Kokrajhar district unit of the Karmacahri Parishad was concluded with day long programme scheduled at Basic Training Centre in Kokrajhar on Wednesday.The meeting...