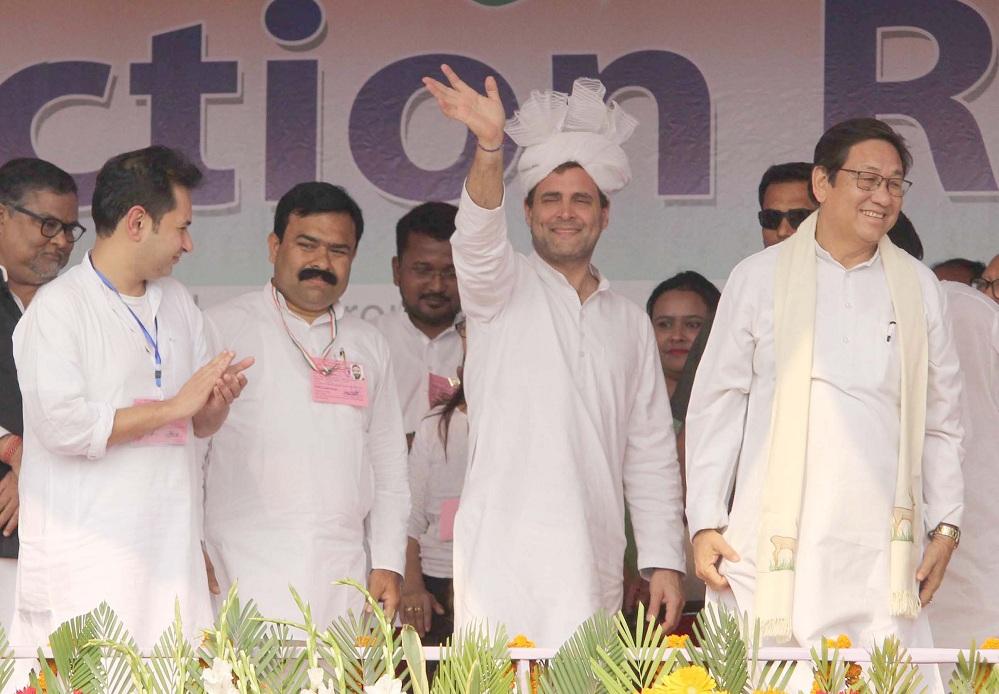 Can anyone advice Rahul Gandhi (RaGa) that what he and the other nincompoops of the Indian National Congress (INC) are doing in the name of electioneering campaign by targeting the defence forces of the country is only going to decimate their prospect – even if there is any, left? What does it take really to win elections in this country? The defence personnel who are keeping their territory safer from external aggression are being targeted by the INC, insanely. Can RaGa and his inept sister, Priyanka – and her equally inept hunk, Robert Vadra, breath freely if the soldiers in the country aren’t keeping it safe. Can anyone, and for that matter of fact the president of one of the country’s so called national party speak such imprudently in public. Does it not look like that the INC and its leaders are digging their own graves by punching national security and defence sector. Can a sensible Indian vote for a party which speaks in tune with the separatists, terrorists, skull caps, Pakistan and all the anti-India jibes?

That the INC does not have any agenda to woo voters in the ensuing general election can be gauged from their questioning the retaliation strike by the defence establishments in the aftermath of the Pulwama terror attack. The BJP won the 2014 election riding high on the “misdeeds” and “scams” committed by the INC led UPA whereas the latter literally finds nothing to take a charge on the “clean” NDA dispensation. What the INC and its morons are resorting to is basically out of dejection and frustration, which is normally the case when one, finds nothing to throw into their opposition. If the party have any sensible brain left then it is high time that people RaGa and other congressmen, including its apologists, should be told that what they are resorting to is only earning them public ire and nothing else. Today, the trash that the congressmen are throwing in the public is only pleasing its own and not the countrymen – who have time and again showed their preference in various Congress shows itself.

What does RaGa have in him? Nothing, though you need to have something when you head a party of the largest democracy. Those who think that RaGa is facing more flak have perhaps forgotten that his statements, whenever he opens his mouth, qualify him right away for criticism. Okay he may not have anything to offer in politics but what should one judge, when he says, “Saffron Terrorism is a larger threat than Islamic Terrorism”, if not appeasing the skull caps. Is it not a laughing stock that universities and institutions invite him to talk when he says, “I woke up in the morning last night” and more insultingly, “Poverty is a mindset” in a country like India – where the INC has deliberately kept the people deprived and poor in their sixty years regime, since independence. One can get a picture of his knowledge on his own country from this, “There’s so much of unemployment in Gujarat. About 27,000 crore jobs are lying vacant there”. Now, how can Gujarat have 27,000 crore vacant jobs lying when the population of this country is 130crores? Or more recently, when he said that all BJP leaders in the country are corrupt, what is the message that he is trying to send when NDA’s governance has been spotless. RaGa, go and get your facts right first, then go and talk in public. You have no right to criticize and insult Indian engineers for manufacturing semi-high speed train, Vande Bharat Express, under Make in India initiative that has developed mere technical snags. Those snags have been rectified since but could RaGa address the same in him.

When one is born in a family with silver spoon in their mouth they are expected to do well in order to keep up that legacy. There is tremendous burden on such shoulders and especially in this case when you are compared with your father, grandmother and grandfather. Arguably, Rajiv Gandhi (RG’s father) and Indira Gandhi (RG’s grandmother) would not have stooped to his level and take over a century old party, straight to hell. But this hellish ways, he has imbibed from his great grandfather (Jawaharlal Nehru) – whose blunders – whether it is Jammu and Kashmir, Northeast, Indo-China war and what had he – costing this country to this date. Imagine, what PM would RaGa make if he happens to get a chance to lead this country. This country cannot afford to have another Nehru like blunderbuss at the helm of all affairs. Many, who don’t want to imagine this, observed that this nation may well go back to darkness from whatever improvement that can be noticed for the last five years, now.

So, the journalist who asked RaGa in UK last year that what he has brought to politics apart from his surname, was spot on but the reply of RaGa that he should be judged by his “capability” and not be “condemned” for his family only proves the nothingness in him. He also urged others to listen to him, talk about issues, such as, foreign policy, economics, Indian development, agriculture openly and freely. How can one expect a sensible discussion with him when has no knowledge about his own country and speaks utter rubbish about issues on which he wishes to talk? Laughing stock. However, RaGa should concentrate on everything else – other than national security, defence, religion or anything else about the country – if at all the stemming humor has any effect on the electorates.

For RaGa to create any impact, whatsoever, he has to think out of the box. Given his “reach”, he should take the help of public relations specialists and try to revive the prospect of his party. He has to understand the fact that if Modi is creating waves with his chai, pradhan sevak, chowkidar and rest of it then he has to come out with smarter ideas instead of beating arrogance in public with dead appeasement tactics. As a leader, he has to show more maturity since he is competing with a persona who is regarded world over and shares a mass base. When Modi says that his vision is to see that the Indian democracy shall always fly and to make it a trillion dollar economy than RaGa’s accomplices like the ever aging Deve Gowda should make more responsible statements instead of saying that the only agenda of the Mahagathbandhan is to stop Modi. What do you mean by saying so that you don’t want the development of the country and its people? What message are you sending to the populace? The INC – which has been running this country and the independent states since independence like private jagirs have to shift its gear or else their current ways is only going to have a suicidal end. The electorates of this country are getting a reassuring example about the lack of patriotism of the INC and its foolish Mahagathbandhan leaders. If the INC leaders had any patriotism in them after the Britons left then they would not have deprived the people of this country from their entitlements and development. Now that Modi is trying to revive and giving the aam aadmi their dues, the morons, on the other side, are seeing that their “businesses” are at stake. Today, none can think of committing another fodder scam since the chowkidar in Modi will not allow that to happen. The INC and its bunch of Mahagathbandhan buffoons should realize the fact that they cannot fool the fellow citizen all the time.

21 Dec 2014 - 9:53pm | Hantigiri Narzary
NDFB-S militants exploded a powerful grenade in Chirang hours after two militants were killed at an encounter on Sunday. The explosion took place at Chapaguri in the evening and there is no report of...

A blind eye towards the changing climate

2 Jan 2013 - 1:00am | Deepika Nayyar
“We have cut down our forests, that is why it does not rain, and ultimately there will be drought…” Kashi Bai of Barua Sagar village in the Bundelkhand region of Madhya Pradesh, reasons for climate...

The unseen causes of Novel Coronavirus
IAF floats askew advertisement, regrets; public questions media’s integrity
Will a border wall work along Indo-Bangla border?
Shillong’s Sweeper’s Lane – The Other Side
Contour disciplining exigencies in social media
Meghalaya's perilous embrace of Congress
Sei Somoy Perie – a nostalgic novel
Modi’s US lobby vis-à-vis challenges in India
Japan, as a nation, owes it all to India
For most mainlanders, India ends after Chicken's Neck