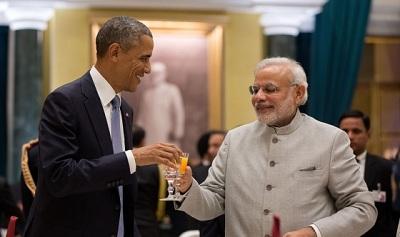 Prime Minister Narendra Modi has a successful second visit to United States of America (USA). The major thrust of this visit was centered on his ‘Make in India’ and ‘Digital India’ dream as his meeting with numerous business czars and CEOs of top techies in USA is a big diplomatic push in that direction. While a purring Indian National Congress (INC) is seen crediting itself for this Digital India drive saying that it was the vision of former Prime Minister Rajiv Gandhi and all subsequent governments took forward that dream. This version of the INC has only earned laughing stock from one and all whosoever has come in terms with this baseless self-glory statement. Modi on the other hand is a tech savvy PM and inarguably the first such Indian PM. That is visibly clear in his style of technology driven governance, which he uses to its utmost to connect with the people of this country. His yearn to learn and most importantly his focus on critical areas of the economy to take on the challenges using technology is awesome and has earned accolades from techies from USA, too. But although the trip was successful but real success of the visit will only be weighed now by what flows from abroad in the form of FDI. There are several challenges ahead to make India the dream home for investors and as they say in USA, ‘ease of doing business in India’. It is not that easy doing business here at the moment but things are indeed moving in the right direction under the current BJP (Bharatiya Janata Party) led NDA (National Democratic Alliance) dispensation.

For doing business with ease and attract investors, India has to make numerous changes from education, infrastructure, bureaucracy and most importantly political system. There are apprehensions from many NRI (Non-Resident Indian) investors and those from USA that the political system in India is so corrupt and bureaucracy is so entrenched that even if the Modi led government is willing to make reforms then there may be a possibility of those getting stalled by the former two. Then there is red tapism and political incursion. The single party rule led mostly by INC post independence has done enormous harm to the Indian economy confining it to a structure that mostly suits its own return after every five year. Those NRIs who have seen the days of License Raj and rest of it observed that rules, regulations, labour laws, taxation et al needs complete overhauling in the country as there are states and cities which has some of the most archaic laws in place. These versions of the NRIs are true since even if we see a small state like Meghalaya where if anybody wants to do business then he will be hounded first by the state ministers, bureaucracy followed by district councils, dorbar shnongs, NGOs and what have you here. So, is anybody a fool that they will come and face all these in order to do business in Meghalaya?

Today, Gujarat, Maharashtra, Andhra Pradesh and all the states of Southern India are the most favored destinations of investors from abroad. We have seen major technological, automobile, banking, to name a few, doing business with ease in each of these states. There is an opinion gathering among investors, who are choosing these destinations because of no political infringement besides other factors. Infrastructure remains a major bone of contention, which has time and again been raised by aspiring investors. Barring these states and some in Northern India, where infrastructure is comparatively better, it remains an area where the current dispensation has to give more impetus to see India as the next manufacturing hub in this region after China.

Today companies world over are going to USA for testing and production of their drugs. USA has become a major pharmaceutical hub because of its available facilities and infrastructure. An NRI pharmaceutical major from USA said that India for that instance does not even have any academic courses in it and so it is unable to open up in that sector. Then the scary taxation regime, which has not been eased by the current government to the expectation of the investors, as there are opinions that if companies invest in India and 40% of that goes in taxes then that changes the entire parameters of making investments. In such a situation, they have every right to rethink on that and move out. Corporates in USA knows what the INC led UPA (United Progressive Alliance) government did during their regime, what they call the ‘Vodafone massacre’ and the current BJP led NDA government in ‘MAT’ (Minimum Alternative Tax) – applicable in case of foreign institutional investors (FIIs). India as a nation, seeking to become a manufacturing hub has to get rid of controversial and outdated laws that are hindering growth of the economy and investments. Many investors are jittery about the Labour Laws and are of the opinion that the more a government tries to regulate the industries the more it gets messier. The role of the government has to be least as the Chairman of Chugh Foundation said in USA if someone is wiling to do business, ten years down the line none knows what a government is whereas in contrast in India the first word they hear in the first thirty seconds after landing here is a government.

The Chairman of Cisco, John Chambers in his Silicon Valley meet with the PM said that education curriculum and academic courses has to be adjusted with the current trends and developments shaping the world of today. This is also an area where India has to make serious adjustments just like the outdated laws in place. Vinod Dham, a techie from Silicon Valley observed that he does not see many start-up entrepreneurs from the country’s IITs, IIMs and sought to know if curriculums of these institutes actually foster promotion of entrepreneurship. Former president Dr APJ Abdul Kalam, who passed away recently in Shillong while delivering a lecture at the Rajiv Gandhi Indian Institute of Management, was for entrepreneurship than job seekers. He wanted to see more entrepreneurs coming out of our institutions of excellence rather than job seekers. For this he envisioned that there is a need to overhaul the education system and our financial institutions playing the role of venture capitalists other than being mere bankers. This can only fructify when the IIMs, IITs, universities and other higher educational institutions adjust their academic courses similar to their counterparts in the west. Today professional educational institutions in the country are thriving upon placements and garner a large chunk of students on that single parameter. Students’ and their guardians’ looks for institutions which can assure a job post graduation. So this job-seeking mindset basically is the outcome of the education system in place which has to change to produce entrepreneurs, was the vision of Dr Kalam.

Modi has a big task in hand. He has got the signal from the investors and now it is his turn how well he makes the desirable changes so that they can come and start their operation here. More than everything else he has to remove the fear of government from the minds of the investors. It is difficult to shake something that has embedded in the economy. But it has to be fast. The Americans don’t like the slow way out. As someone said that it takes only four hours to open a firm in USA whereas it takes two months in India. Prof. Wadhwa of Stanford Business School, USA said that red-tapism and corruption in Indian economy is far too much still and there are genuine fears in the minds of investors from USA and elsewhere who sees India as an investment destination with a robust market. Can a change be effected at the earliest by Modi as he assured to the American business tycoons and techies? Can India become another USA in terms of doing business? Well all eyes are now on Modi. There is a genuine feeling that if he is around then we can do it.

One more refugee dies in camp

7 Aug 2012 - 4:04am | editor
Refuges in Chirang alleged inadequate medical facilities in the camps. The medical teams find it quite difficult to move to the camps in the absence of security forces. CRPF jawans sprang upon a team...