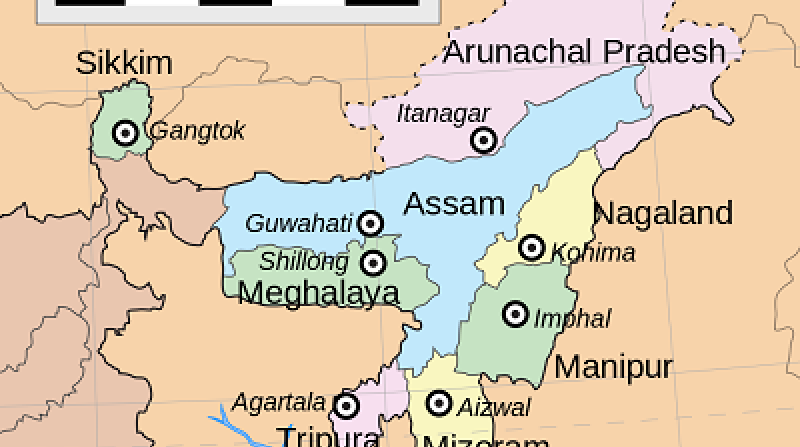 I am tempted to write this piece after my neighbor, whose son, a local tribal from Meghalaya, studying in a private institution in Maharashtra had to deal with some uncomfortable questions, that may sound hilarious to many, following the demise of former president Dr APJ Abdul Kalam here in Shillong on July 27, 2015. These inquiries, which for many northeasterners staying in mainland India is a common parlance, tends to push us into thinking sometimes “where are we”. For a majority in the country the northeastern (NE) region does not exist at all. They believe that Kalam died in a foreign land where he was invited to give a lecture, something that he has been consistently doing after demitting the office of the president. The unfortunate part is that even his death could not address the misunderstanding that mainlanders hold for the NE region. For many India ends on this part after the Chicken’s Neck – the narrow 14 miles Siliguri corridor, with borders of Bangladesh and Nepal on each sides, in Northern Bengal that holds northeastern region with the rest of the country – starts a foreign land where people with mongoloid origin looks live. They liken this place to something like the Amazon Basin of South America, where civilization has not yet dawned. On this occasion my neighbor’s son, who requested me not to name them, was asked by his peers where Shillong is and if it is located in Myanmar. Then he was questioned about the currency of Shillong and if he holds an education visa from the Indian Government to study in this country. He even had to deal with questions whether people of Shillong and this region – which according to them are in the prehistoric age – still hunt animals for their survival using customized weapons made of branches of trees, bows and arrows. An interesting question that was put to him was why and who invited Kalam there and whom he was supposed to address, indicating what a former president was suppose to deliver in a ‘jungle’.

My neighbor’s son was blushed initially but when he regained his self realized the lack of geographical sense of his classmates all of whom are pursuing higher education. It may entice us to guffaw when we hear and read local tribals from the NE region dealing with such investigative questions but perhaps cannot imagine the mortification that one is subjected to when he/she faces such situations. No matter Kalam has visited here many a times being a guest faculty at Rajiv Gandhi Indian Institute of Management (RGIIM) but that could not dispel the doubt of the countrymen about this region. Former External Affairs Minister and Congressman, Natwar Singh has written a book titled “One Life is Not Enough”, which was released earlier this year speaking about New Delhi’s political corridors, Volcker controversy and withdrawal of Sonia Gandhi as Prime Minister candidate in the Congress led UPA Government, the ups and downs of the Congress party among others. But how apt is this book’s title when applied in case of Kalam that a single life of his is perhaps not enough to enlighten the countrymen on this region. There is an emergent need to include this region in the academic curriculum of all educational boards in every state so that students are made to know and learn about the NE region right from their schooling days. This author has come across others northeasterners who were subject to ‘find-out’ questions like what are the modes of communication in the NE region and whether one has to travel by boats on rivers in order to reach their destination. When some learned person utter such words in this age of instant information it tends to question if Information Technology has really transformed human lives on earth. Well such version does indicate no it hasn’t. Certainly, we need many more Kalams to come and vanish here before this region is known countrywide unless academic curriculums aren’t overhauled.

But all are not asking absurd questions with a sense of cultivating knowledge about this region. There are many others who ask pertinent and pointed thought-provoking questions, too. The author is told by a friend of his working in the national capital where he was asked once why Indians need a pass to enter states like Arunachal Pradesh, Mizoram and Nagaland despite them being Indian states. Why is an Indian frisked at every point in these states in presence of other ‘untouched’ tribal passengers’ and questioned about their purpose of visiting the state. These variances in treating one countryman differently from others are also responsible for creating such opinions about this region among the majority mainlanders, my friend was told. This is certainly a valid point from which we cannot wash our hands off. My friend said from his own experiences that there is a mass opinion in all Indian states that the NE region is a ‘foreign land’ where passes/visas are required to enter. Now, who is responsible for this? While my friend’s explanation that such official passes are in place from the time of the British Raj could not convince his counterparts in the national capital. He was countered by facts that such archaic rules that creates division and differentiates countrymen from one another should be abolished at the call of the people of the state as has happened in many other Indian states, where British era archaic laws were repealed on the demands made by the people of those respective states.

This version is true since there are numerous instances when genuine Indian citizens were harassed in this region under the garb of ILP (Inner Line Permit), an offshoot of the Bengal Eastern Frontier Regulations, 1873. This document was an effort by the then British Government to regulate movement of people in certain identified areas to protect the British Crown’s interest in tea, oil and elephant trade. The idea was to prevent establishing any commercial venture by ‘British subjects’ – a term that was replaced by ‘Citizen of India’ in 1950 – that could rival the Crown’s agents. However, despite the fact that the ILP was originally created for safeguarding the commercial interest of the British Raj, it continues to remain in effect officially in the NE region in the three states in the name of protecting tribal cultures. But instances show that there is exult too undoubtedly, among the tribesmen of this region to harass mainlanders with such acts. The fear of the people of this region that their traditions and customs including their women will be seized even by those who has been sent by the union government to man their establishments here is as ridiculous as it can get. These factors are certainly impeding the unitive northeastern region an integral part of India, which should be negated instead of indulging in bashing the union government for negligence always. How can it be allowed that states, which prevents entry of Indian citizens with the aid of a British era document or reluctantly allows them in, cries foul in mainland India when others cannot spot their geographical identities? Few years ago a non-tribal retired head of history department of a reputed college in Shillong was invited by a religious socio-cultural organization of an indigenous tribal community of Meghalaya to address their audience. The lettered historian’s rich erudition earned rave reviews in the local media. But it did not go too well with the said community think-tank who rather questioned absurdly what right does a non-tribal have to comment on tribal customary practices. Now where it is written that only tribesmen knows their practices and others don’t. The professor who has written books on history being referred by students of higher studies, which are proudly displayed in public libraries, was questioned on his right who has given all his life to history. Now, who can save such communities perishing from this earth? The community leaders rather should ask themselves pertinently, what expertise they have to sustain their depleting customary practices in the state.

Another relevant question that is often asked here is the negligence meted by the national media houses towards this region. It is often accused of turning a blind eye to this region whereas insignificant news of other mainland states finds space in the national media. Even if the Prime Minister of the country visits this region what one sees is some strip items rolling on channel screens. But why is it so have anyone tried to know? Why should national media come at all when this region does not have to offer anything in terms of commercial value? For any news channel to open up their shop needs huge corporate advertisements to sustain. Can this region offer them this prospect at the first place? It is not that there have not been any attempts as this author being associated with a national news agency learnt that a major channel attempted to open up its base in the recent past but had to give up on its idea because of lack of business here. Media houses, whether it is national media or a local newspaper needs advertisements to run the show but what have this region to give in that regard. The best option, thus, for such channels is to station a correspondent for the entire region which all are doing at the moment.

30 Jun 2012 - 1:44pm | editor
Electronic Media Forum Assam (EMFA) has planned for a three day long television journalism workshop in Guwahati during October. The workshop, where the news channel editors and senior journalists are...

6 Jun 2008 - 6:11pm | editor
Former Rajasthan Chief Minister and Congress veteran Shivsaran Mathur has been appointed as new Assam Governor following an end to the term of Lt General (Retd) Ajoy Kumar Singh. The decision to this...