Japan, as a nation, owes it all to India 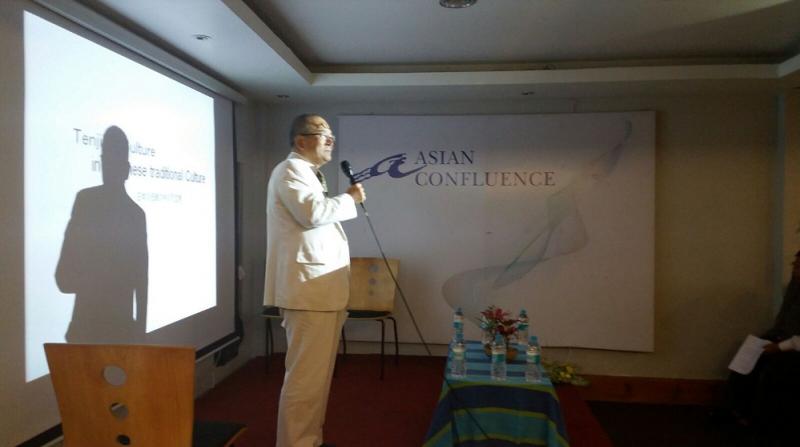 “The northeastern states of India should cooperate with each other in terms of their tourism potentialities, culture and tradition, food habits and create a depot in Japan to invite inbound tourism. The geographical condition, cuisine and taste, good atmosphere here are similar to that of Japan. This will not only transform the economy of this region but also open it up to the larger Asia – which is one,” said the Chairman, Japan India Tourism Promotion Committee, Tsutomu Sato on his second visit to Shillong. His first visit was two years ago when he represented Japan on an invitation by the Meghalaya Government which called tour operators from all over the world.

Acknowledging candidly that he had no idea about this region except the historical incident of the Burma Campaign of World War II or the Battle of Kohima where Japanese Army laid their lives, he has certainly learnt more in these couple of visits. “In Japan fermented food products are very popular. Soya sauce made of soybeans, called Noatto is a fermented soybean that Japanese eats for breakfast. This kind of food originated in India. I took lunch with tomato soup and chowmein, which tasted similar like Japan, at Guwahati Airport,” he said narrating his trip here. Apart from foods, the Austro-Asiatic countenance of people here is similar to the Japanese people. Invited by Asian Confluence, a civil society platform or the ‘third space’ at Shillong, its Director, Sabyasachi Dutta said that there is a bigger impetus now on Indo-Japan cooperation since China is a threat to both these countries. “We have seen the recent meetings since 2000 between Indian and Japanese Prime Ministers which has opened up a new vista of trade relations between the two countries. However, there is a third space which has to be nurtured, the people to people contact, which Sato calls understructure and emphasizes upon,” he said.

The political, economical and commercial relationship between India and Japan is what Sato calls ‘superstructure’ while tourism, student exchange programmes and cultural affairs forms ‘understructure’. Sato who gave a historical presentation at the Asian Confluence said that India and Japan has made rapid progress in the domain of superstructure and observed that there is much more to be done in case of the vital understructure. The rise of Asia and the miracle progress by Japan in the post World War II era has seen the exchange of these two nations proceeding in full speed now.

He said that both India and Japan had no relations between them from 1960s to 1990s, primarily due to the low growth rate in India after independence till late 1980s vis-à-vis the rapid growth of the Japanese economy from 1950s. Despite the absence of any reason to conflict between the two nations, because it belonged to the opposition camp Cold War structure under each of the world, which lasted a long time, it has become both an estranged relationship. The people of Japan follow the Mahayana Sect of Buddhism that flourished in this island nation from 538AD onwards. Prior to Buddhism, Japan followed Shintoism, which is a pure form of ancestor worship. Buddhism, which is rated as world’s most peaceful religion, travelled from India to Tibet then to Northern China and Japan. In these countries the Mahayana Sect is under influence whereas the Buddhism that passed through the Bengal Bay by Malaysia, Sri Lanka and Indonesia, there it is known as Hinayana. Sato said that Buddhism is identically followed in both India and Japan and the starting point of the connection between these two nations’ dates back to Buddhism. “There has been a one sided flow of Buddhism from India to Japan so much so that during the Asoka Period (503AD-710AD) Shotoku-Taishi as regent of his aunt, the Empress Suiko, wrote “the 17 articles of the Japanese Constitution” of which the document lays its stress on the greatness of that Indian Ideal,” he said. Japanese ancestors particularly had longed for India as Tenjiku, and spirit of India has poured into Japan.

The Nara Period (710AD-794AD), Fujiwara Period (858AD-1185AD), Kamakura Period (1185-1333AD) and Ashikaga Period (1333AD-1568AD) saw the foundation of Japanese people, their society, belief, tradition, civil and cultural affairs based on Indian spirituality and Buddhism. The transformation of the then Japan on the ancient Indian religious beliefs, love and compassion coincided with the dynastic rules in India, the luminous sacrament of spirituality leading to tantrikism and phallic worship and esoteric Buddhism, its gradual dwindling following the age of Bhakti by Lord Ramanuja and others in India and revival of Yamato ideals in Japan are some important developments that unfolded in these two nations in tandem. Thereafter the destruction of Buddhism in 1203 during the Kamakura Period in Japan upset people strongly but finally spirit conquered over matter, as people there realized which in India is called Jnan or insight during the Ashikaga Period. The Ashikaga ideals owe its origin to Zen, from the word Dhyan, meaning meditation in supreme repose, which was introduced into China through Bodhi Dharma in 520AD. However, in 1568AD the Spaniard and Portuguese vessels came to Eastern Indonesia and Japan in search of spices and introduced to the ancient Japanese people westernization, gun and knowledge about world geography and a heliocentric theory. So worldview of Mount Sumeru was abolished and longing for India diminished.

Thereafter the contemporary Tokugawa Period (1600AD-1868AD) in Japan and the Mugal Dynasty (1526AD-1857AD) in India saw the seclusion and narrowing down of both nations. In 1868 Japan held restoration and vowed to make a modernized country, leaving behind its seclusion. “Imperialism in Japan forced it to take the modernization route and by then India and China were already colonized,” said Sato. There was however an impact of the 1905 Russo-Japanese War Peace Treaty when India recognized Japan. During the World War II, Netaji Subhas Chandra Bose joined forces with Japan to get Indian independence and Bose’s Indian National Army participated in the Imphal Campaign in 1944. Japan had tried to help independence of India. After, India’s independence the first Indian Prime Minister, Jawaharlal Nehru donated an Indian elephant name Indira, after her daughter, to Japan which brought a ray of light into the lives of the Japanese – who still has not recovered from its defeat at World War II. India signed a separate peace treaty with Japan in June 1952 to waive of all reparations claims against Japan – for which it thanked the compassion of Buddha.

The vital element of Japan lies always in her art. The great life of the ideal – the longing desire of Buddhahood to save others and not itself – these are the true burden of Japanese art, a grand interpretation within the reach of human mind. All Japanese periods in history are the indication and memorial of those constituents of her consciousness, which are really essential. It is an art in which the whole nation participates as in India the whole nation combines to elaborate thought. Japanese great epochs of expression have always followed in the wake of waves of Indian spirituality and it is the culture of Continental Asia that converges Japan, and finds free living expression in her art.

Sato’s presentation depicts that it is in Japan alone that the historic wealth of Asiatic Culture can be consecutively studied through its treasured specimens. Thus Japan is a museum of Asiatic Civilization and yet more than a museum because tenacity that is the singular genius of the race leads it to dwell on all phases of the ideals of the past in that spirit of living Advaitism which welcomes the new without losing the old. However, Sato said that in addition to these traditional heritages that the two nation shares between themselves, now the Indian community is adored in Japan for their IT prowess as they appear in downtown Tokyo through IT business and ‘Namaste India’ and ‘Maharaja India’ festivals. Sato however, desires to see, beyond this modern relationship, younger Indian generation to Japan to know how their ancestors had transplant Indian spirit in Japan.

On asking what India can take from Japan, Sato gave a thought provoking reply. He said that the 21st century capitalism born in the west runs recklessly beyond the limitations of mankind and we are anxious about a risk of endless human wants of economy. While urging mankind the importance to immobilize desire, a trait in Buddhism, he said that the idea of Buddhism and Hinduism in the center of ideals of the East is given attention. “In Kumbh Mela every 12 years, millions of sadhus participate who believe in the metaphysical world but from the standpoint of economics they are jobless persons. India emphasizes the way of the life of sadhus even though they are unemployed. This philosophy of spiritual world may be the driving force of energetic activity of economy and virtual thinking of IT revolution, world in the present goes directly beyond space and time to metaphysical thinking of the Vedic world in the past,” he said. Like matter of the present connects the past spirit to suggest the future oriented spirit in new concept, he wants to take the new type of tourism in which traditional matter be combined with the most advanced matter. “The world heritage religion and the traditional heritage like yoga and ayurveda are combined with the advanced science like medical treatment, pharmacy, IT and biotechnology. I recommend younger Japanese to undertake such type of tourism so they will find the spirit of India which their ancestors longed for,” he said.

While observing that both India and Japan are in two sides, while Japan is a homogeneous nation, India is heterogeneous. “India is unified (homogeneous) against a variety of heterogeneous, unity in diversity,” he said. Sato feels that India as a big nation of abundant young population, expert in IT and biotechnology and an exporter of different skilled manpower to other countries can learn more from the Japanese way of primary education, although Japan respects India. “Japan is a small country with fewer resources. It emphasizes on common people’s education, ‘Terakoya’, with government support. This form of education was popular before the restoration of Japan into a modern country,” he said elaborating about Terakoya – a kind of school for common people found all over Japan. While pointing that India can actually take on to this model of Japanese education, he said that with the support of Japanese government common people are getting opportunities to read, write and count in these schools. This form of education is still continuing in the island nation as a foundation amidst modern education system.

However, he rued that the younger Japanese population aren’t much aware about its past and all that they owe to India. The modern generation is more inclined towards westernization and it is where Sato is concentrating all his efforts to promote exchange Indian and Japanese tourism and to perceive the historical understructure that built the relationship of between both these countries. This he believes is the Asian Confluence of the future for the next century.

9 Jun 2012 - 1:25pm | editor
The Oil and Natural Gas Corporation has claimed to have discovered a new oil well in the in Golaghat district. The oil giant said that the new well has been spotted in Chalukpather area in the...

BJP rally flags off in Guwahati

18 Oct 2012 - 7:27pm | editor
BJP president Nitin Gadkari on Thursday flagged off the BJYM’s rally organized to honour the Indo-Chino war heroes.In his address at the flag off function at Machkhowa, Gadkari said that the...