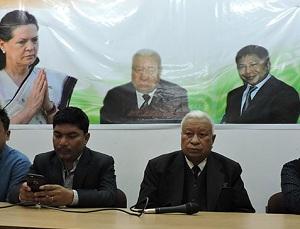 If we are to assess one thing clearly about the 2018 Assembly Election to the Meghalaya Legislative Assembly at this point in time then it is the focus and charisma that is awaited coming January. Except that, the assurances, claims, slamming of one party by another will continue to rule the roost and this is not something new in the Indian political diaspora. Nonetheless, this is going to be the most sought after elections given the emerging complex political equations. There is much at stake in this election when the sixty seats to the state assembly goes up for grabbing no sooner the Election Commission of India releases the dates. There is much expectation from the BJP which has since 2014 is on a victory drive states after states. It has made serious inroads into the northeastern region of the country, having in its kitty all states except Meghalaya, Mizoram and Tripura. At present it is eyeing Meghalaya and at this moment in time there is not much to applaud when it ultimately takes on the rival parties in fray.

But till date nothing can be said whether the people of Meghalaya actually wants a change in leadership. We have seen routing and decimation of Congress regimes from all over the country post 2014 when almost all states, barring a few, has opted for change in leadership and reaffirmed their faith on the BJP. So can this be said with certainty if the people of Meghalaya want any change or not? We can’t say this since the elections to this state does not invite much media attention and so it does not even attract the pollsters to actually assess the veins of the voters before and after elections. What we see mostly is some kind of extracted reactions whereas the missing of mainland media attention, pollsters and agencies to analyze the failures of the government is actually what the Congress has been utilizing and enjoying for the last many decades here. They like it this way. The Congress style of governance is to prevent. Their style is a single word difference from that of the Britons – “Divide and Rule”, that is, “Prevent and Rule”.

What is astonishing here is to note that those who make their opinions in the media prefers to comment on the beaten tracks on cow slaughter, minority bashing and rest of it by fringe elements but jolly well oversee the various issues that is plaguing the state of Meghalaya under the Congress rule since time immemorial. None knows whether they can’t see or they don’t want to see the real side. They have avoided the language of local norms while going national. There are even those residents, who have shifted their base from the state to other mainland Indian state, who prefers to comment on such fringe issues rather than speaking on the issue of Islamic upheaval back in their new den at the behest of the state administration. Right after the award wapsi episode during the days of intolerance debate in the country when many of our “nationalists” preferred to return their awards finds it more prudent to speak when Sonu Nigam takes a dig at polluting loud speakers emanating from mosques than what is afflicting their own community. In the annals of pathetic climb-downs, we have many from Meghalaya too, who sees more in why some preposterous and opportunist social workers being not allowed visas rather than the plight of numerous teachers in the state who are denied their rightful dues whereas legislators decides and increases their own salaries.

There is no word from these intellectuals about the many failing fronts of the Congress led governments in the state and this biasness on their part actually increases the doubt more about their own cozy clubs being threatened if there comes a time when a regime change effects. We all know what role is played by religious leaders during elections in the state and it is as near as the fear which they instill in the minds of their devotees when they target the voters. The fulcrum of their tactics is the fact that they apparently believe that the voters in the state are largely and hopelessly naïve. The ball game here is different than other states. Here it has been seen time and again that the people, mostly from the villages may not be getting their quota of beneficiary schemes, which they are entitled to mandatorily under law, but still they won’t utter a word or use their fingers, concurrently while voting, to show their anger on tired of being betrayed time and again. They won’t show their disrespect to the man in robes when he hops to their shanties not with religious sermons but to beg their franchise for a political aspirant. Now in such a situation how threatening is BJP is anybody’s guess. Can the Assam education minister and convener of North-East Democratic Alliance (NEDA), Himanta Biswa Sarma, who is considered as the “Amit Shah of NE” target and break this influence of the “men in white robes”.

So all those shenanigans who only sees that the BJP is a party governed by the RSS, what about the Congress here which is a marionette at the hands of the men in white robes. The Congress has lied to the people of Meghalaya, repeatedly and shamelessly, much of which is also attributed to the spineless local purring parties. Despite these odds, will there be a change this time. Let us wait and see.

Endhiran, the most expensive flick of India

5 Sep 2010 - 1:58am | Rajdweep
Nothing much left to discuss about this great piece of art.But Still we talk about it.Though it is a bollywood movie but no doubt, ‘Sholay’ is more than a movie.It is one of the greatest...