Will a border wall work along Indo-Bangla border? 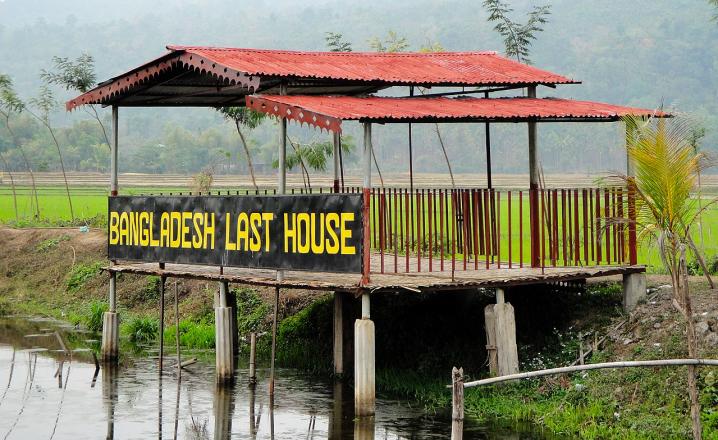 Well Mr. Donald Trump, the outlandish and outspoken US President, with his usual signature facial expression said recently that “walls work” with regard to his decision to construct a border wall, along the border of US-Mexico and even declare a national emergency after the US Congress (the lawmaking branch of the national government) declined to his demands for billions of dollars to fund the proposed wall at the southern border. The president has earned a slew of lawsuits over his emergency move and one may well wander whether such a wall is required in India’s northeast which faces a serious threat to its demography. Arguably, the US President’s idea on a border wall may well be correct since walls really work when it comes to prevent illegal movement of people from across the border, although the same wall does also divide. The USA is facing, as Mr. Trump says, “…invasion of drugs, invasion of gangs, invasion of people” from Mexico into its soil and the President has every right to confront national security crisis. Mr. Trump may well be facing lawsuits in courts following his decision – which is also seen as a constitutional crisis back in his country – but he is correct till that moment if the average Americans and their societies are facing threats from those coming across the border.

I think a similar wall across the India-Bangladesh border may well be announced immediately in India and especially when general elections are round the corner. Cross border infiltration in the northeastern part of India has changed the demography of several districts of Assam and other northeastern states. The white skull cap has become ubiquitous in this region more so than in the past. It is indeed an irony of its type that the people of this part of the country has objected the CAB (Citizenship Amendment Bill), 2016 and that too at a time when much of the region’s demography been swayed to the side of the skull caps. Has anyone seen a better madness than this?

Call it Bewakoofiyaan or what, the so called indigenous people of this region and their elected representatives did not see the damage that has already been done to their societies and were hysterically objecting to the CAB which will give citizenship rights to Hindus from Bangladesh, Afghanistan and Pakistan. Does the tribesmen and others of this region knows what blunder are they doing by objecting the CAB since this objection is legitimizing the presence of the uncountable skull caps, otherwise, who are changing the pattern of this region’s hearth. In any case these caps will turn and change all others if they are not countered with a bill like this. A sensible Assamese, Manipuri, Naga, Arunachalee and what have you here, should realize the fact that their tradition and culture including their numbers may well remain intact if the Hindus are accommodated since the “Non-Hindus” in the present case may well turn this region to an extension from across the border.

History is replete with instances how this region has been “Crossed” by the notorious “British infiltrators through their East India Company” in the past changing the natives lifestyles, traditional beliefs and practices and rest of it. It is in their interest to realize this fact more than anybody else what danger are they inviting. It is indeed insanity of the highest order that the people of this region are protesting against rehabilitating a community who are known for their tolerance, to which this country is a living example, while not uttering a word about the “whitener”. Will, for example, the Khasis and Garos – the two major tribesmen of Meghalaya – object in the same tone and tenor, say, if the union government brings in a bill tomorrow to grant citizenship rights to their owns living in Bangladesh. Where on earth do they think will their brethren get citizenship, if not in India?

Also, as many sensible tribesmen from this region observed that the domiciles of northeast should not fear about being overwhelmed if the CAB becomes a law since given their inborn hatred and detest for outsiders, and especially dearth of any livelihood opportunities in this region, the immigrants will invariably look for other greener pastures in the country. It is also not to be forgotten that this region with its seven sister states came into being after curving out of undivided Bengal – whose natives are no outsiders here.

Hence, in the present scenario a wall across the Indo-Bangla border is more than a necessity since the issue here is no less threatening, if not more than in USA. The BJP whose image has dented a bit following the CAB issue can take a leap forward in this regard since the inept Rahul Gandhi and his equally inept sister, Priyanka Vadra is visionless and directionless. The tribesmen of the northeastern states should not also carry even an iota of doubt that the Congress party, which is objecting this bill now, will bring in the same tomorrow if they get a chance. The situation in India too, demands a declaration of national emergency.

4 Jul 2013 - 10:03am | AT News
A heavy to heaviest rain and thunder is likely to lash Assam during the next 48 hours forcing the government to be prepared for itFive districts are on alert in view of the impending downpour....