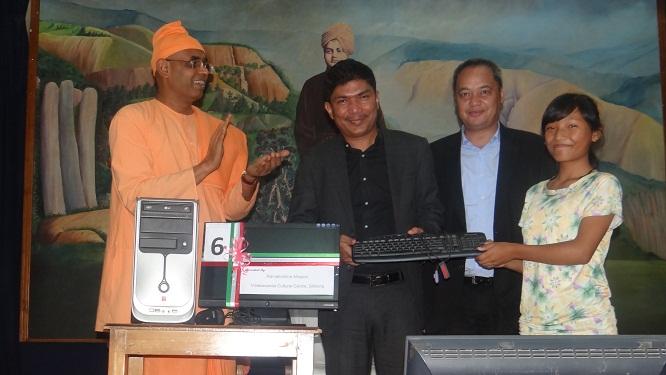 Now aspirants can avail direct Microsoft Certification in Word, Excel, PowerPoint and Access from Microsoft Headquarter, USA at Ramakrishna Mission Vivekananda Cultural Centre (RKMVCC), Shillong. This certification, known worldwide to equip students with a “cutting edge” in the world of information technology, will now be awarded to RKMVCC students following an approach by Microsoft to RKMVCC for Microsoft Certification through online examination. Swami Achyuteshanandaji Maharaj, Secretary, Ramakrishna Mission and in-charge RKMVCC while informing this on the 57th Convocation Ceremony of computer trainees of the institute recently to the jubilation of all said that the computer training unit of RKMVCC had so far trained 25 thousand students of the region in the last 12 years. On the occasion, 6 meritorious students were awarded with computer sets and nearly 1500 students with certificates. Swami Achyuteshanandaji was instrumental in starting the computer training unit along with other youth development activities in RKMVCC – which has become the first choice not only for students seeking computer education but also moral education in the light of the preaching of Swami Vivekananda. The institute serves mostly students from the economically weaker section of the society. The RKMVCC stands tall today due to the untiring efforts of Swami Achyuteshanandaji and his co-monks.

Swami Vivekananda during his visit to Shillong in April 1901 had expressed his desire to have lot many educational institutions which would offer not mere degrees providing education but the education that makes one expert in vocations, which enables one to stand on one’s own feet. It was in April 2001, the centenary celebration of Swami Vivekananda’s visit to Shillong were in full swing. The erstwhile Quinton Memorial Hall, which was inaugurated by Swami Vivekananda himself during his 1901 visit where he delivered the last public lecture of his life, is today RKMVCC. It was here wherein Swamiji had expressed this desire. Some people inspired by Swamiji then decided, “Why not have something as Swamiji wanted, at the very spot where he uttered those words.”

The humble beginning came with the starting of computer training programme in August, 2002. To begin with there were just five computers, two faculties and thirty students in three batches. Dedication of the teachers, the ambience and very personalized care provided by the institute saw the number of trainees grow gradually. It was a boon not only for Shillongites but also for young men and women from far flung places who could avail of the very qualitative training without emptying their coffers. Initially only two to three month courses were offered to the youth. In 2008, it was decided to provide both six months and one year certificate courses without losing the flexibility of the existing short term courses. Subsequently, specially tailored courses were introduced to meet the requirement of people from other age brackets.

The response to the opportunities provided by the institute has been overwhelming. Some people feel it is an honour to be a part and parcel of this prestigious organization, while for many others it is a coveted opportunity to learn at their own institution. Today, there is no looking back as it provides professional courses like Tally, DTP, Web Designing, Database Management, Programming and many more. These courses are offered in flexible timings at reasonable rates. Concession is provided to poor and meritorious students. Most graduate students are well placed now. Besides these courses in computer, RKMVCC’s Sanskriti – a personality development programme for holistic grooming of youths imparted on the basis of Vedanta Philosophy is the most sought after. The centre also has a library with good collection of books, journals, magazines and other study materials. A bookshop is also attached to the centre dealing in Vedanta Literature. Meditation plays an important role in the life of every students and the centre has a hall upstairs with an altar of the Holy Trio. With the growth and success of RKMVCC from its humble beginning it is on an expansion mode now. A new building is coming up on the rear side of the main building – where Swamiji gave his historic speech in 1901. This building will have all modern amenities that a centre with educational institutions deserves besides guesthouse facilities, state of the art auditorium and more.

Earlier, speaking on the occasion Sports and Youth Affairs Minister, Government of Meghalaya, Zenith M Sangma said that with an objective to facilitate the students of the state with computer education the state government is coming up with a policy in which the IT department will be tying up with RKMVCC and initiate Microsoft Certification from the month of July. “I would urge my fellow students to gather knowledge from everywhere and study sincerely without which certificates will be a mere piece of paper,” he added. Commissioner and Secretary, IT etc., Government of Meghalaya, DP Wahlang said that his department will take up various initiatives proposed by RKMVCC regarding subsidy on fees for economically weak background students. “We will study the proposal and ensure that more and more people from poor background can avail this facility,” he said. He also assured Swami Achyuteshananda sponsorship of 50% of examination fees for Microsoft Certification by the Government of Meghalaya.

The afternoon session was attended by Meghalaya Home Minister, Roshan Warjri, who applauded the contribution of Ramakrishna Mission in social service mainly in the field of health, education and relief. “Computer is very necessary in employment sector. In this competitive age, getting job is not so easy. So developing skills is the only way to meet with unemployment and job satisfaction,” she said.

Battling out the RJ marathon with a soldier&#39;s spirit

12 Aug 2008 - 1:11am | Nanda Kirati Dewan
If you have not tuned in BIG 92.7 FM now you are missing the most happening thing in the city. Guwahati is remaining awake with their idol RJ Mandira to support her in Big RJ Marathon across 35...