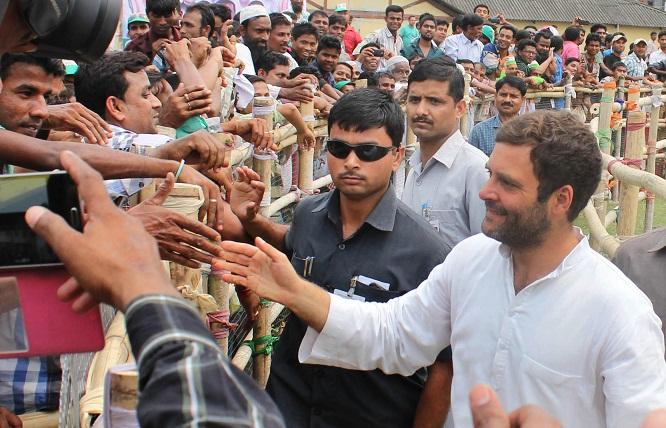 The 2014 General Election will be remembered more for its desperate, intense and dirty poll campaigning ever held in this country since independence. The two major political parties – BJP and Congress – have crossed every limit in this election that all wonders is there a limit at all and where is the model code that the Election Commission of India is suppose to preserve at any costs. From polarized campaigning to paid news syndrome, this election has seen all of that and there is much more to come before the final phase is over. Campaigning has hit a new low in this election as there is an avid competition of polarization between the two major national political parties. Their ways seems like who can polarize more.

But polarization in this election is a tactics adopted by the Congress if one has to analyze who started the fight first. The growing popularity of the BJP, particularly its Prime Ministerial candidate Narendra Modi, in the national media and every possible public domain is something that the Congress as a party with its band of leaders is unable to counter, tame or control. The poll campaign started by Modi at a much earlier stage to pave the way for the biggest democratic franchise on earth centred on his achievements in Gujarat state, popularly known as “Gujarat Model”. His achievements of the society and linking it to a sense of national pride, artistically putting them in his electioneering speeches and campaigning supported by facts and documentaries has been a major crowd puller even in the distant regions of the country which are regional strongholds. The Modi wave, which started as a dictum, is today in reality a wave and the response of the main opposition Congress is only assuring this as each day passes by. Modi’s campaigning projected the Gujarat Growth Model for the entire nation and his usual taunting of the Congress ostensible Prime Ministerial candidate Rahul Gandhi, his dynasty and its loyalists. But the Congress think-tank got it absolutely wrong in their assessment of the growing popularity of Modi and his brigade. He captured every arena where he set foot, so far.

Unable to tackle the new darling of Indian media in Modi, the Congress resorted to its 19th century politics in 21st century. It is a blunder right from the word “go” as polarization and dividing voters on the lines of religion and caste could not earn it anything. Rahul Gandhi could not become the “giant killer”, his dynasty would have expected him, as his several high decibel speeches could not thwart the relatively comforting and yet penetrating speeches of Modi. That the Congress initially ran out of agendas can be gauged from its playing the single card “Godhra” among rank and files of its dynasty. After realizing that this is turning out to be a beaten track not going to cut much ice since it is not even going too well with the Muslim voters, they changed their stands shifting to other issues and the latest being AB Vajpayee. This former NDA Prime Minister, who is known for his statesmanship and stature that a famed international magazine has even ranked him the sixth honest person on earth then, has been branded as the weakest PM of India after the meek and feeble Dr Manmohan Singh is cornered by his own men in the PMO (Prime Minister’s Office) followed by the opposition now. Dr Sanjaya Baru’s book is not only doing ripples in the nation today gripped with election mood but it has actually opened inside out the real “I” of Dr Singh, that he was instantly branded as the weakest Prime Minister this country has ever seen. The Congress party which was the other day praising AB Vajpayee in its website immediately changed its stand after Baru’s book is released. From praise to disdain, that virtue has never been consistent with politicians is proven by Congress here.

Congress desperation is evident in every move it has taken so far in this election. One of their overt desperation was meeting the Shahi Imam Bhukari for garnering Muslim votes. Well, seeing that Rahul Gandhi is being cornered in the campaigning the Congress went back to its old Bahu Sonia Gandhi who took the paid news way and flashed a 3minute advertisement asking countrymen to denounce BJP as it will ruin Indianess and the secular fabric of this country. This election will, what it appears to be will be the worst debacle for the Congress party and the best ever show by BJP, if opinion polls conducted by reputed national media houses along with independent agencies are to be believed. The BJP has so far maintained “Aab ki bar, Modi sarkar” but the Congress on the other hand has changed from the son to his mother. From “Mein nahin, hum” to what BJP leader Arjun Jaitley rechristened “Mein nahin, Mom” the Congress party has shifted from Rahul Gandhi to Sonia Gandhi but will her charisma work this time similar to what she had done in 2004 travelling the length and breadth of the country urging countrymen to rely on the “hand”. Such is the state of this party under the aegis of Sonia Gandhi, as Baru’s book divulges, today that none doubts its palpability anywhere under the sun. The Congress have realized it too late in fact that this David (Rahul Gandhi) is unable to tackle the Goliath (Narendra Modi) as the latter is seem riding high on his tirade against a relatively “novice” Rahul who still has to make his mark felt in the political arena.

The television advertisement by Sonia Gandhi some days back is rather an indication of this fact how dearly is the Congress deprived today of a leader who can take on Modi and his whirlpool wave all over the country that it is even felt in remote Jaintia Hills district of Meghalaya and Assam – where a perfume baron said that his faith’s god will not forgive them if votes goes to a particular political party. The said advertisement is a frantic move by Sonia Gandhi at a time when the phase-wise polls are nearing their deadlines and the ensuing result in May 16. So much about paid news and the rest of it has hit headlines in recent times where it is alleged that the interview of Modi by a television news channel was fixed which forced its editor to quit in protest. The content of this interview speaks volume about the fixation whereas the final verdict given by the judge is preposterous and thank god that it was not a real court. Now if this interview is fixed as alleged then what is the fate of the advertisement by Sonia Gandhi? Another side to Sonia jumping at the dying hours is something that every India mothers do for their son, no matter from whichever nation they have come from, to save her child and take the whole burden on herself. This is the the hidden side of real “Bhartiyata” or “Hindustaniat”, which got totally lost in her dirty tirade. Now the people of this country are asking where the Congress’ “Bhartiyata” or “Hindustaniat” was when scores of commoners toiled for justice in the Nirbhaya rape case in the national capital. Where were Rahul Gandhi and Sonia Gandhi then? Was this national shame of an incident not a direct attack on “Bhartiyata” or “Hindustaniat” that Sonia Gandhi is brazenly talking about now when it comes to vote?

These advertisements expenses made by these two major political parties tells the mind-blowing amount of money that is being spent in this election just to form the next government whereas people wonders from where this money – that can revive the Indian economy of all its ills – is coming from. For the Congress the recent book by Dr Sanjaya Baru has spilled out all the beans that the countrymen would have never known what was actually going on inside the PMO. That a constitutional office being sacrificed and hijacked by an unconstitutional entity is what Baru’s book reveals at a crucial stage which might snatch away the last straw on which the Congress ship is clinging upon somehow. Vinod Saighal in his article “The Accidental Prime Minister – Implications for National Security”, The Statesman, New Delhi recently wrote “The signs that the national interest was being sacrificed by an unaccountable extra-constitutional entity wielding immense power, whose foreign background, antecedents, travels and interactions – both within India and abroad – have never been fully investigated or allowed to be revealed was suspected by many in political, and media circles and certainly by all those in close proximity to the power hierarchy in the capital, not to mention foreign circles. The Prime Minister’s acquiescence to diktats from 10 Janpath is recorded in Baru’s book; what has not been recorded is the utter helplessness and lack of spine shown by the man when he was bypassed by ministers and bureaucrats, including in the PMO, carrying out instructions of Mrs. Gandhi without even keeping him informed...” This book is a clear history about Sonia Gandhi’s anti-national motive to help Italy and Italians for which she selected a “pawn” in Shivraj Patil “to clear all cases against Quattrochi” as Saighal writes.

Another book “India’s National Security Crisis – Reinventing The Republic” by Maj. Gen. (Dr) GD Bakshi, SM, VSM (Retd.) where the author have commented that the rise of the Aam Aadmi Party (AAP) seemed to empower the middle class and give it a voice and a direction. “Unfortunately subsequent events have derailed that promise. It seems more a foreign inspired “Indian Spring” that ostensibly generates a great deal of euphoria but in the end results in anarchy, chaos and systemic confusion. That has been the tragic denouement of the Arab Spring and the Ford Foundation funded AAP Spring seems like any other coloured revolution, more designed to trigger anarchy and chaos and weaken the centre,” says the book. This book also talks about the Nehruvian pacific mindset reasserted by the UPA (United Progressive Alliance) government in deliberately starving the country’s armed forces of resources and modernization besides Nehru’s flawed portrayal of India’s independence to non-violence instead of the real hero Netaji SC Bose and his INA (Indian National Army), a Nehruvian mindset which even cost the country in the 1962 Indo-China War. If Baru book’s reveals a lady from behind controlling everything then this book reveals that the Congress as a party has not changed even an inch from that Nehruvian mindset.

Photo: Rahul Gandhi at a election rally at Nagaon by UB Photos

5 Feb 2014 - 2:33pm | AT News
AIUDF has issued whip to all of its legislators today to vote for the Opposition consensus candidate in the upcoming Rajya Sabha poll.The party legislators along with the senior leaders held a...

Allegation of supply of substandard materials in Dhubri under ICDS

26 May 2011 - 3:31pm | A Chakraborty
Deputy Commissioner of Dhubri had sealed a godown where rice and peas were stored for the children under ICDS on May 24 on the basis of the complain made by the Anganbadi workers of the Jamadarhat...