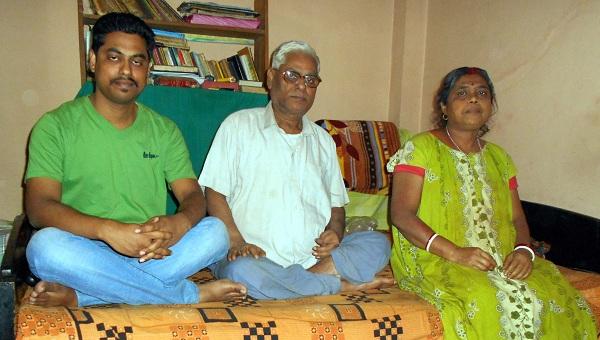 Will power has an important role in human life and those who have stamina to fight all odds, set an example for others to follow for a successful life. Even disability can be defeated if a person has determination to lead a peaceful life. We find a number of cases in the world when people lose heart on their failures in life. At the same time there are certain exceptions, who despite many odds in their life make it worth living by their strong will power. Here is an example of the life of a person who came out from a small village of Siyani Belchhi in the district of Jamui in Bihar. Born on January 2,1952, Rakesh Pathak became a handicap suffering from paralysis in his right leg at his tender age of two years. He passed his childhood and primary schooling in a small village of Banka district in Bihar. Afterwards, he shifted to Bhagalpur and completed his matriculation examination from Bahadurpur High School. For higher education he had to go Patiala, where he completed his degree examination in Arts from Punjabi University. In search of livelihood he came to Guwahati during year 1978. Life was tough, but he has to live it, so he started private tuitions and subsequently joined some private schools. He became very popular in the locality as a Hindi teacher in due course.

Meanwhile, he was offered a jobs in local Hindi daily newspapers as a journalist. After half a decade serving as a journalist, Rakesh returned to the teaching profession and joined a private school as Senior Hindi teacher. Destiny had to test his patience further and in February 2000 his left leg and hand suffered heavy paralysis attack. He lost his school job as he became completely invalid. Even it was not possible for him to go for toilet without the help of his wife Rani and son Samir. Now he is completely bed-ridden. Some students come to his room for taking tuitions, which is the main source of his income. Rest of the time he passes in reading, writing and translating eminent Assamese writers’ books in Hindi. He has done good study of Assamese literature. Asom Rashtra Bhasha Prachar Samiti got a number of history, geography and social studies text books from class seven to ten, translated in Hindi by him. He has become a bridge between the Assamese and Hindi literature. His translation of eminent Assamese writer Rajani Kanta Bardoloi’s novel ‘Manomati’ was published by Gyan Vigyan Samiti. Sentinel Hindi newspaper published in series Ranju Hazarika’s novel ‘Ek Dweep Sat Kabra’. Sahitya Academy awardees novel ‘Abhiyatri’ written by Nirupama Borgohain was also translated in Hindi by Rakesh Pathak for Doordarshan. Besides, he keeps himself busy in the translation works in Hindi from other languages. A few books written by him in ‘Angika’, (which is a native language) have been published. On January 3, 2014, Rakesh Pathak was felicitated by Jahnavee Angika Sanskriti Sansthan for Hindi and Angika writings.

Since the year 2000, Rakesh Pathak keeps himself busy with independent writing, freelance journalism and Hindi teaching. He is not a beneficiary from government agencies or other institutions. He needs cooperation not kindness. (He can be contacted on his mobile No.09864150953).

Could you please suggest me

Permalink Submitted by Akansha Kaushik on Wed, 01/07/2020 - 16:24
Could you please suggest me any Assamese or any Indian novel or short stories with characters with intellectual disability

26 Feb 2009 - 6:02pm | editor
Two hardcore ULFA militants died during a heavy gunfight between ULDA and police and security forces in Majuli on Thursday morning.According to information, acting on a tip off that a team of ULFA...

8 Oct 2015 - 9:07am | AT News Dimapur
The Kohima police seized two vehicles at interstate check gate at Khuzama on Wednesday. According to police, during routine frisking and checking of vehicles, they intercepted two bolero’s...