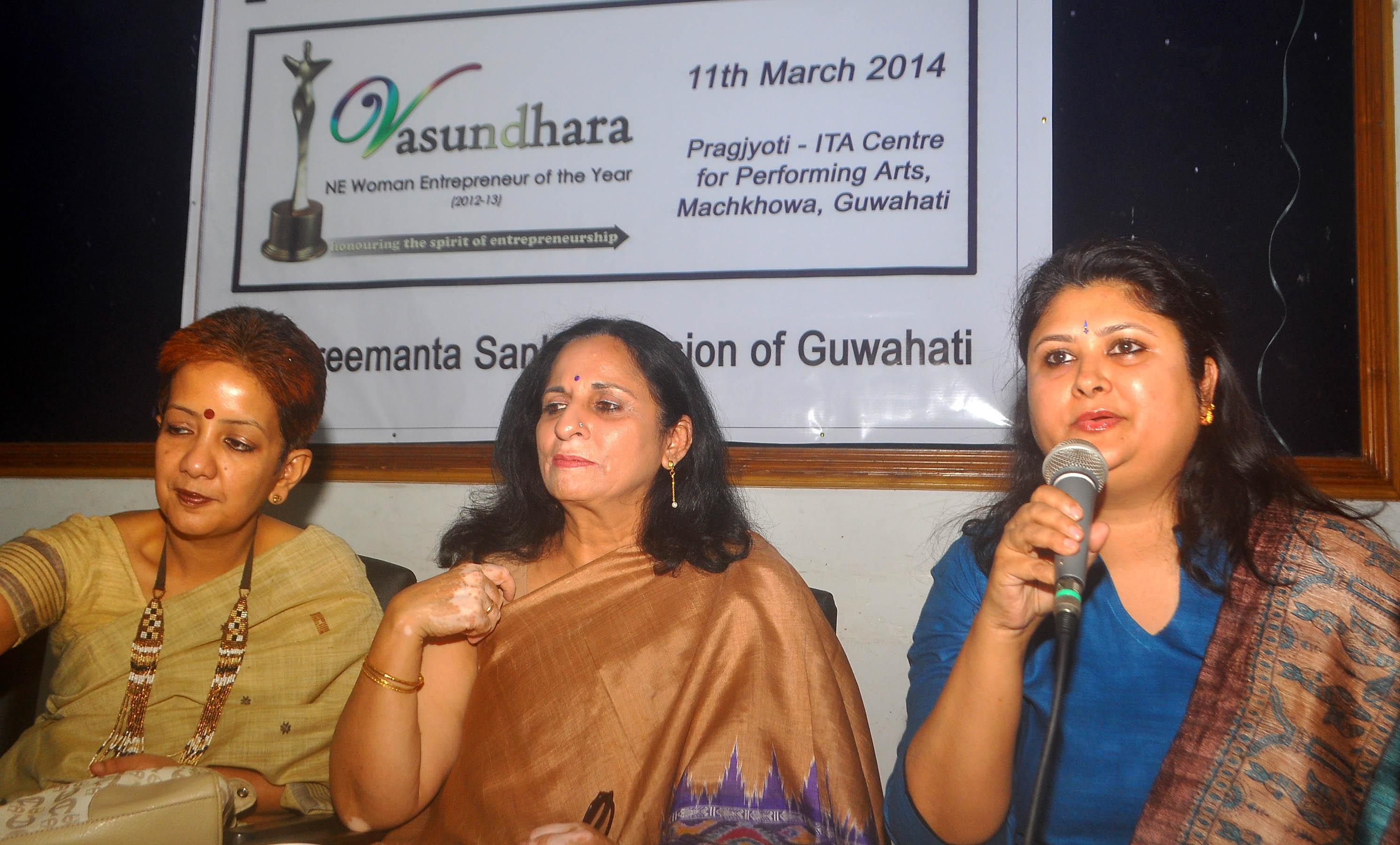 With the aim of honouring the spirit of womanhood, Sreemanta Sankar Mission of Guwahati, a 28 year old voluntary organization based in Guwahati and having members from different NE states, instituted a unique felicitation program in 2013.

“Vasundhara – Celebrating Womanhood”, which saw felicitation of 20 iconic women of Assam on the occasion of International Women’s day 2013, in its second year of inception has grown into a regional level program highlighting the spirit of woman power. This year, the organization has instituted an award program to honour iconic women entrepreneurs from across the region including Sikkim. Titled “Vasundhara – NE Woman entrepreneur of the year (2012-13)” award, this pioneering effort seeks to honour the women entrepreneurs of the region so that their stories of success can be emulated by others and more and more women can be encouraged to set up businesses and contribute towards economic uplift of the region.

The selection of the woman entrepreneurs has been done by a selection Panel constituted by Sreemanta Sankar Mission of Guwahati with members from important institutions related with enterprise, business and media.

The nominations of woman entrepreneurs in 8 states of NE India were made by recommending authorities including banks and financial institutions, industry bodies, departments under the ministry of MSME and industry and leading media personalities working for decades in the region. A total of 84 nominations were received and out of that 50 nominations with impeccable track record were shortlisted by the Panel.

A strict selection criteria was adhered to- taking care to ensure that the process was fair and above board. Emphasis was made on the fact that the enterprise was first generation; self-owned and had a healthy business graph, without any bank default. Its impact on society and innovation in enterprise, along with employment generation were also important criteria in the grading of the enterprise.

Study of the nominations revealed that there is a palpable change in the mindset of the entrepreneurial woman in the region. Venturing out into hitherto male domains, women are engaged in businesses ranging from industrial manufacturing, printing and publishing, skill development, commercial farming, education, service based industries including, media, tourism, transportation, ship building, food processing, garment manufacturing, handloom and handicrafts, information technology, human resource management and allied services.

On 27 th of February, after several hours of deliberation, the panelists made their final selection known and selected the following 8 entrepreneurs: -

All the above named women entrepreneurs have been invited to the award program on 11/03/2014 at the Pragjyoti – ITA Centre for performing Arts, Machkhowa, Guwahati from 5.30 pm onward.

The winner of the “Vasundhara – NE Woman entrepreneur of the year (2012-13)” award will be declared on that day by the Panel.

Jayanti Patnaik, the first Chairperson of the National Women’s Commission and the first women MP from the state of Orissa and the first lady of Assam will be the Chief Guest in the function which will also see top officials from different banking and financial institutions, trade promotion agencies and the central government taking part in it. The Indian Council for Cultural Relations is participating in the program as a partner organization and will host a cultural program showcasing the rich tradition of the Northeast India and the spirit of womanhood.

Moreover, Prasar Bharati Broadcasting Corporation of India (Doordarshan and All India Radio) has supported this program as the official Electronic Media Partner and is going to telecast the award program live through its Northeast channel.

The proposed award and felicitation program besides felicitating and awarding the selected women also seeks to establish a connect between the women entrepreneurs of the region with various institutions facilitating industries, trade and commerce and offer a platform to share their policies and requirements.

“Vasundhara – NE Woman entrepreneur of the year (2012-13)” is a sincere attempt to showcase the positive developments in the field of enterprise and business due to the various policy frameworks put in place by the Govt. of India and is an effort at showcasing the best that women entrepreneurs of Northeast India have achieved with their hard work and consistent efforts.

The conducive environment for growth of business and enterprise and the consistent effort on part of the central and the various state governments in the region has encouraged many women to set up micro and small enterprise. And initiatives such as the “Vasundhara – NE Woman entrepreneur of the year (2012-13)” award are expected to bolster the efforts of women entrepreneurs across the region to sustain and grow their enterprises, improve on quality and contribute towards the socio-economic growth of the region.

The “Vasundhara – NE Woman entrepreneur of the year (2012-13)” award program on 11/03/2014 at the Pragjyoti – ITA Centre for performing Arts, Machkhowa, Guwahati from 5.30 pm onward is an open program for all and interested citizens, different organizations, NGO’s, women groups, SHG’s etc. along with the honourable members of the media are kindly invited to attend it.

25 Aug 2015 - 9:57am | AT News
After Dr Himanta Biswa Sarma, five sitting Congress legislators are believed to have been preparing to join BJP on August 28.Three of them have been camping in New Delhi to clear the formalities....