Noted cultural activist, educationist and brother of music maestro Dr. Bhupen Hazarika breathed his last at a private hospital in Guwahati on Saturday.  Late Hazarika, ex-music secretary of Cotton College, was a retired professor of Saint Anthony College, Shillong. He was also aasociated with Indian People’ Theatre Association (IPTA) along with elder brother late Dr. Hazarika. He was also instrumental in estabilishing ‘ Madhuchayanika, a cultural organization of 1960s. Condoling his demise on behalf of Dr. Bhupen Hazarika Foundation, Secretary Dipanka Hazarika said that his demise is a great loss to the cultural field in the state. ‘He was a uniting force among people of Assam and Meghalaya and lived permanently in Shillong.’ Said he. Born in 1938 Prof. Hazarika completed his matriculation from Sonaram High School (now Higher Secondary) . After completing graduation in Botany from Cotton College he did M.sc From Gauhati University. Later he joined in Cotton College as a demonstrator of Botany Department. After a few days he joined in Saint Anthony College as a professor. His last rites will be performed tomorrow at Navagrah. Tez Hazarika, son of Dr. Bhupen Hazarika also condoled at his demise.

4 Dec 2016 - 7:59pm | Shajid Khan
A 30-year-old forest guard was injured when a rhino attacked him in Orang National Park at about 8 am on Sunday. The guard, Kartik Dey, was on duty at Kunakata camp area with other forest personals... 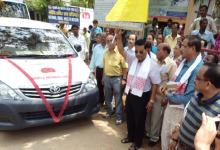