All is not well in BTAD

Bodoland Territorial Autonomous District (BTAD) is facing problems of rampant extortion from businessmen, farmers, employees and general people and kidnapping of businessmen. The business community like Hindi and Bengali speaking are largely targeted by some illusive extremist elements whose real objective is to make money for them and create terror in the area. The premier students’ organization of Bodoland, All Bodo Students Union (ABSU) through a memorandum,  has urged the Union Home Minister, Sushil Kumar Shinde to take action against ongoing acts of kidnapping, extortion and illegal taxations in the area due to failure of law and order.

The workers and farmers belonging to Bodos and Gorkhas are levied heavy monthly taxes to the tune of 3 to 4 percent of their earnings. The ABSU has alleged that the local administration is unable to tackle the situation due to some nexus between the extremists and the local police. The general public is scared of their link which is causing distrust among various communities and heading for undesired conflict among them. The memorandum further adds that the residents of Indo-Bhutan border areas have alleged that the extremists carry census over the earning sources of family and fix the amount to be paid to them as ‘tax’. A recent report from villagers has revealed that the taxes are fixed against number betelnut trees, bamboos, household, animals, chicken, goats etc. This situation has brought frustration in the lives of the people irrespective of caste and fuelling the communal hatred and distrust. There are reports that some petty businessmen have been brutally killed for not paying the illegal taxes levied by the extremists.

In certain parts of Kokrajhar and Chirang districts a few Gorkha villagers were threatened to face dire consequences in case of their failure to meet the extremists’ demand. There are reports that some Bodo villagers have also been threatened of dire consequences in case they fail to meet their demands. The memorandum was submitted by the ABSU President Pramod Boro, General Secretary, P Narzary and Adviser, Rwa Gwra Narzary, on September 5, 2013 to the Minister for taking suitable action in order to get the peace return in the areas. Meanwhile, in view of the ongoing Tripartite talks on Bodoland issue, the ABSU has suspended its agitation on highway and railway blockade, bandh etc. However, the organization has resolved to continue other democratic, non-violent peaceful programmes for the cause in the days to come.

In a separate memorandum to Union minister for Tribal Affairs V Kishor Chandra Deo the ABSU has urged to take action for implementation of the Scheduled Tribe and Traditional Forest Dwellers Act 2006, especially in Sonitpur district of Assam. According to the law any tribal, who are the resident of forest area on or before the commencement of the Act have the right to have lands and everything related to their basic, civil and human rights. But unfortunately after the elapse of complete six years of enactment of said law also Bodo and number of tribal tribes are denied from the land rights and consequent upon that they are deprived from Panchayati Raj system. Due to this condition the tribal living there can not apply for bank loans for any purpose because they lack and proper land documents as required.

please Say "Alll is weal" to

7 Feb 2010 - 9:49pm | editor
Two boys were feared to have dead when they fell from a boat on the river Brahmaputra on Sunday. According to information, the incident took place at Sunsali to have a picnic party of 7 Class IX... 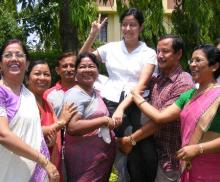