Industrial development in India has ever been dependent on the political will of leadership since independence. It was because of the fact that no ‘fair policy’ could be framed by the Union Government for ‘equal development’ of all the regions of the country simultaneously. That is why some of the areas remained completely neglected and others developed beyond limit. Besides the metropolis and a few industrial cities, where opportunities were ample for industrial growth, there have been vast disparity in the growth of industries. The industrialization of a particular area depends fully on the degree of political influence in its favor.

A few industries in the country have been setup on the basis of availability of raw materials, which is prime factor for consideration before taking up such projects. After coming up of giant steel plants at Bhilai, Rourkela and Durgapur, the demands for such a project in public sector raised from united Bihar for such a project, which resulted in Bokaro steel plant under Jharkhand state. On demands from the southern part of the country the steel plant in Tamilnadu’s Salem came up. The Barauni and Mathura oil refineries were setup at long distances from the places of raw materials. All these came up because of political influence and pressure from the local leaderships. Had there been no pressure by strong leadership of that period the chances for Guwahati and Bongaigaon oil refineries were bleak. Now, It is because of no pressure and the present weak political leadership in the north-eastern states that no industry in the region could bring success to the economy of these states despite availability of valuable raw materials like oil, tea and forest products.

In a democracy like India, the representatives of the people have some special role to play in the interest of the people they represent. Unfortunately, a number of such people from this region have no voice of their own. They fail to fulfill their commitments to the people despite their assurances before they return to the Parliament or Assembly. On the other hand a few leaders dominate over the others and do their best for their electorate.

Lack of education, extreme poverty and immaturity of our people in maintaining high standards of democracy by keeping the faith alive in the principles, leads to their maximum exploitation by their political leaders. Our innocent and simple voters are allured by attractive slogans before the polls and they join this or that camp purely on certain temporary issues. This leads to unsuccessful attempts to solve their long standing problems. Unless they get really powerful leaders to represent their cause, their dreams remain an illusion.

For example among the influential leaders, who really worked for the development of their constituency, the former prime minister late Indira Gandhi was perhaps on the top. All-round development of Rae Bareli in Uttar Pradesh, which she represented for more than a decade from 1967 to 1977 is a bright example of such development which can be called as a ‘forced’ one in the other words. Practically having no resources for industrial growth, Rae Bareli, an unknown place for millions of people till 1967, figured on the industrial map of the country within a short span of time. Rae Bareli was one among the seven most backward districts of Uttar Pradesh (UP), to which the Central government provides capital assistance. The district is primarily an agricultural belt and due to various schemes of the Central and State governments for several years the atmosphere could be envisaged. Had Mrs. Gandhi not lost the election in 1977 from Rae Bareli Parliamentary constituency, the chances of its attaining peak in development were much higher. Whatever the schemes came up during her time for a decade were most successful and satisfactory. More than fifty large, medium and small scale industries are working in full swing at present. Rising from zero to this status this place has recorded a good achievement.

These developments had been welcomed in some circles and got sharp criticism by the others. The leadership is not to be blamed for all these. Our people are responsible for not producing sincere and dedicated leaders who can bring justice for them. Majority of the leaders are not sincere yet they hold high offices and position in society. It makes the entire society ‘corrupt‘. Such leaders neither can face the truth nor bring justice to the masses.

The people had no doubt in the leadership of Late Indira Gandhi and later Late Rajiv Gandhi, who represented Amethi parliamentary constituency exactly on the lines of his mother. We need more leaders to serve the people sincerely in all corners of the country. A change in our social structure is must. We need proper education which works in real life. We are not to undo what has been achieved, but we have to achieve what could not be. 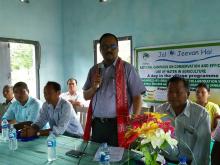 29 Jun 2017 - 11:16am | AT Kokrajhar Bureau
A national campaigned was organised on the conservation of water and agricultural respurces held at Thuribari village in Kokrajhar district on Wednesday involving farmer and villagers from rural...