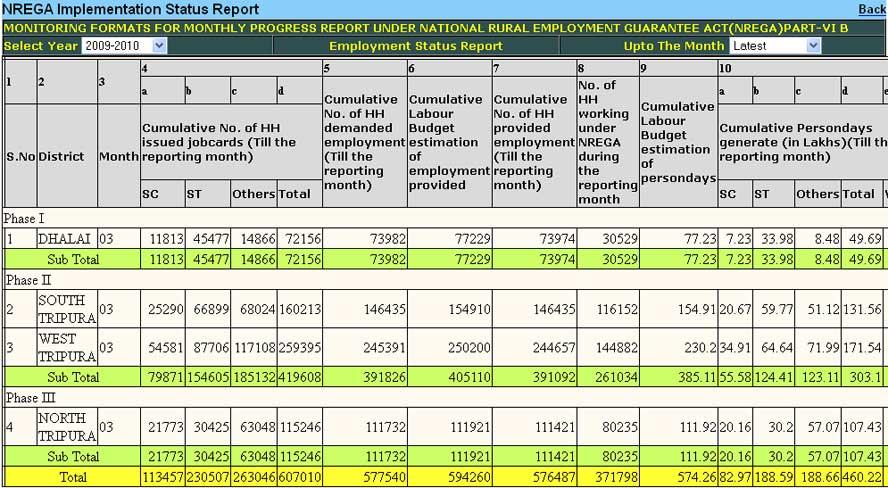 Tripura state government has put the state on top in implementation of MGENREGA scheme for the fourth time during the financial year 2012-13. The state has kept itself on the top by providing 86 workdays against the prescribed 100 days, whereas the national figure stood 39 workdays during this period. Addressing the media persons in Agartala recently, Tripura’s rural development minister, Jitendra Choudhury said that even during the years 2011-12, the state achieved the target of 86 workdays. The state of Mizoram got the second position in the country by working 69.25 workdays. The state of Tamil Nadu by achieving 51.26 days was the third and Andhra Pradesh stood fourth by providing 49.61 workdays. Similarly, by working 48.52 work days Maharashtra got the fifth position and Sikkim held the sixth position by providing 47.69 workdays. Among the ten top performers, Andaman attained the target of 47.02 workdays and Kerala by providing 45.34 workdays stood at eighth position. Rajasthan and Himachal Pradesh got the ninth and tenth positing by providing 44.46 and 43.44 workdays respectively.

He added that the Government of India had fixed 90 workdays for Tripura during 2012-13, but due to declaration of Assembly elections in the state and disruption by opposition party in the state the work was disrupted in certain areas. The Election Commission’s representatives ordered to stop the work in Western district. Further, the Union government failed to provide full fund for the completion of the work. As a result in spite of will, the work could not be completed. The Centre provided some amount for the work on 31st March which was the last day of financial year 2012-13.

According to available statistics the number of eight members family in Tripura is 42,781.During the financial year 2012-13 job cards were issued to 6,35,604 persons, which was 75 percent of total families in the state. Out of this the work was sought by 5,97,304 job card holders, which is 94 percent of  total job card holders. Accordingly, 99.83 percent people got the work. Women’s share in getting the job was 41 percent. Majority of card holders are male, otherwise women’s share would have gone up 71 percent. Choudhury further added that during the financial year 2012-13, the total work was completed 5,14,42,000 work days.

It is to be noted that during the year 2006, first MGENREGA work started in Dhalai district of the state. After next two years Tripura got the first position in the implementation of scheme. Since the very beginning there was not a single state in the country in the field of generating workdays as Tripura did. During last three years, in the year 2010-11 the state performed 67 workdays when the National figure was 47 workdays. During 2011-12 and 2012-13 Tripura’s performance was 86 workdays against National figure of 42 and 39 workdays respectively. Scheduled caste and Scheduled tribes participation was 17 and 43 percent respectively.

25 Feb 2011 - 1:05pm | Daya Nath Singh
The Gauhati High Court directed petitioners Asian Centre for Human Rights and others in PIL No.6/2011 to provide practical and workable solutions to the issue of displacement of the Rabhas and...

25 Jul 2017 - 8:54am | Robertson Tanti
Banking in the rural areas especially in the Indo-Bhutan borders is still in a deplorable state. The people especially tea workers inhabiting in the tea gardens of Udalguri district walk miles for...