Women of Assam weave dreams in their looms... We very often echo Gandhiji’s famous line when we talk of our age-old, indigenous silk fabric of Assam. The golden thread, which is one of the strongest, generally has a long life and has a special place in the hearts of the Assamese. Silk production and weaving are intrinsically associated with Assamese culture. Muga, is produced by the Antheraea assama caterpillar. However, climate change and pollution now pose threat to the future of this national heritage.

Last October (2010) the silk growers of Lakhimpur and Dhemaji (these are the two districts where Muga is produced in large scale) suffered heavy losses. All silkworms died out due to increase of air temperature and humidity. In Lakhimpur district alone about 10 lakh Muga silkworm perished. According to the Sericulture Department of Assam, the loss is directly related to change of humidity and air temperature. Air pollution stands as the prime cause for this environmental imbalance. On the other hand the affected farmers link the cause of this loss to the rampant use of pesticides in neighbouring tea gardens. Silkworm production has suffered a setback, according to the farmers, largely because of pollution from the brick kilns in the surrounding areas coupled by use of pesticides. It is to be noted that the silkworm needs temperatures around 30-35 degree C and a humidity level of 80-85 per cent in order to thrive.

The entire state has been experiencing a crisis in the production of Muga silk due to extreme weather. The state received only 60 percent of rainfall during the last monsoon months. This adversely impacted the rearing of silkworm. Silkworms, grown outdoors, are highly sensitive to climatic conditions.

Bubul Borgohain of Chiloniting-Konwar village and Jogyashawar Gogoi of Dishangkosh village are two silk-growers and inherited the business from their forefathers. They had a two-acre Som (Machilus bonbycina) farm at Dishangkosh Arabari vilage. In 2009, Oil and Natural Gas Commission (ONGC) carried oil explorations near the farm. During seismic survey to detect crude presence with explosions about 20 lakh silkworm died within a week.The vibrations caused by the explosions killed the delicate silkworms.

Such incidents are very common in Upper Assam where oil companies like ONGC and Oil India Limited (OIL) are carrying out oil exploration for decades. This has marginalized silk cultivation in those areas. Borgohain and Gogoi gave up Muga cultivation after this incident with a loss of about Rs .4 lakh . Moreover, the oil companies are burning up natural gases emitted from oil wells. Silkworm cannot survive in these areas as burning of gas pollutes the atmosphere changing air humidity and temperature required for silk cultivation. Many silk growers had to give up their age-old occupation in the upper Assam districts of Sibsagar, Dibrugarh, Jorhat and Golaghat.

Assam contributes almost 90 per cent of Muga silk and 65 per cent of Endi (or Eri) silk production in the country. The state has emerged as one of the leading producers of silk in the country with the climate of Assam being favorable for growth of Mulberry throughout the year. The raw silk production in Assam during 2008-09 was 1261 mt., which included 1141 mt.  of Endi silk , 105 mt. of Mulberry (pat) silk.

Food for Endi silkworms are abundantly available in the state unlike Muga. The Muga silkworms are dependent on the availability of Som trees. Of the three varieties, Endi silkworm is the easiest to rear. Endi is grown indoors and genetically more diverse.

Of late the vagaries of the weather, unpredictable rain patterns and persistent drought, has taken the toll on Muga cocoon production. For production of pure variety, Muga seeds need to be produced from seed cocoons that are collected from areas that are pristine. Since Muga is a wild variety of silkworm, a natural and pollution-free environment is needed for its survival.

Permalink Submitted by joy deep ray on Sat, 01/01/2011 - 19:36
Nice article indeed! Need more scientific approach to bring in notice to government. Overall an good article. Hope you'll write more because this is not a question of culture but also answer to livelihood of silk cultivation communities. 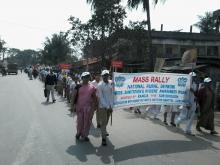 11 May 2015 - 3:38pm | AT News
Over 65 media persons with their spouses joined in a fresh Hepatitis B vaccination camp organized by Dispur Hospital at Guwahati Press Club on 11 May 2015. The camp started at 11 am and continued...