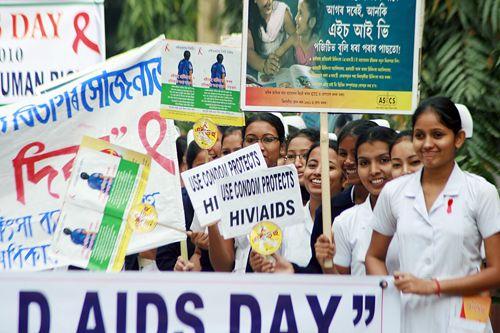 December 1 is World AIDS Day where individuals and organizations from around the world acknowledge the world wide struggle against HIV/AIDS. The theme for World AIDS Day 2010 is Universal Access and Human Rights. The protection of human rights is fundamental to combating the global HIV and AIDS epidemic. Violations against human rights fuel the spread of HIV, putting marginalized groups, such as injecting drug users and sex workers, at a higher risk of HIV infection. By promoting individual human rights, new infections can be prevented and people who have HIV can live free from discrimination. Like the other parts of Assam, the World AIDS day was also observed in Central Assam’s Nagaon district. A rally to light the theme of Universal access and Human rights was organized by the Assam State AIDS Control society in collaboration with district administration, which marched the whole town. The awareness rally was flag off by Additional Deputy Commissioner of Nagaon Dr. Om Prakash. The rally was attended by Nurses, students, NCC cadets and the health workers along with the officers of district administration. Different NGO’s like Gypsy-Care, SOLACE etc. also participated the rally and distributed leaflets. After the rally, a general meeting was held at district library auditorium which was attended by a large section of people of different communities. The meeting was attended by 34th Batt. CRPF Commandent H.S.Mall, Superintendent of Police Nagaon Nitul Gogoi, Health Officers, Paramedical staffs & Blood Bank employees of Nagaon B.P. Civil Hospital.

It is to mention that, according to latest statistics of UNAIDS, 33 million people are battling HIV worldwide, of which 2.5 millions are children. In among 33 millions, 2.5 millions HIV patients are in India. The spreading of message and making all aware of prevention, treatment & Care can only save the world from HIV/ AIDS.

10 Oct 2015 - 7:47pm | AT News
Apprehending outbreak of a volatile situation over the beef controversy chief minister Tarun Gogoi on Saturday urged the people to go all out against the dirty politics to monger trouble in the state...