Indian Food Corporation (FCI), North East Zone Contractors’ Federation has threatened to begin an indefinite non-cooperation with effect from August 16 next, in handling and transportation of goods throughout the region, in protest against failure of the FCI to resolve its nine-point demands. Addressing the media persons in Guwahati on 13th August, the Federation’s President, Rana Saidul Zaman said that the non-cooperation would continue till their demands not fulfilled. During this period no truck registered under the Federation would transport goods to and from FCI godowns in the NE region.

The Federation made it clear that they did not oppose the direction of the Apex court regarding the overloading, but demand to find out some alternate arrangement so that the contractors do not suffer losses. In this matter the Federation had earlier informed the government as well as the FCI senior officials. On July 12 last a delegation of the Federation called on the Executive Director of the FCI NE Zone and through him submitted a nine point memorandum to the Government of India’s Food and supply minister and the FCI chairman and Managing Director. The copy of the memorandum was also sent to all chief ministers of NE states and all four FCI general managers. The authorities were urged to respond within ten days of time..

On July 21st a meeting of Federation’s representatives and Executive Director was held, but there was no outcome. As a result the Federation resorted on three days non-cooperation from July 26 to July 28. Although the agitation was successful, but the Federation members were harassed too much by the authorities. On 29th July Food Corporation of India’s Chairman came to Guwahati and the Federation sought permission to meet him. On July30 last the Federation delegates called on the FCI Chairman at Hotel Brahmaputra Ashoka and discussed the problems with him in presence of other officials, but the result was unfavorable and disappointing. Therefore, the Federation has decided to go on indefinite non-cooperation with effect from August 16 next.

5 May 2015 - 10:21am | AT News
Despite a set of stringent measures trafficking of north eastern girls refuses to die down in Delhi.Delhi police have rescued two girls from Assam at a brothel in the national capital on Tuesday....

11 Jul 2017 - 7:28pm | AT Kokrajhar Bureau
A total six relief camps have been opended for the flood affected peoples in Kokrajhar and Chirang districts in last 48-hours as Gaurang, Champamati, Sankosh, Modati, Gurufela,Saralbhanga and Aie... 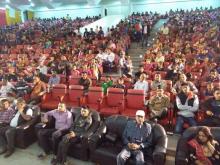