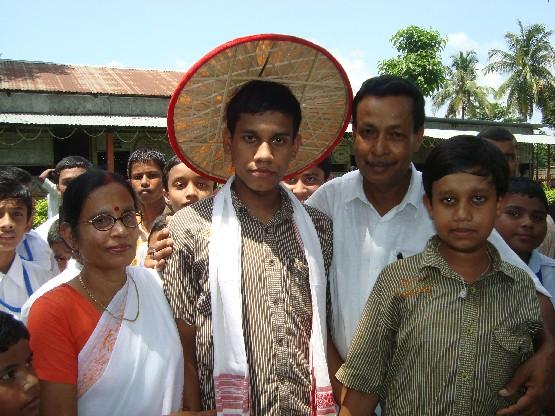 Jugal Talukdar shines at the top most in the list of HSLC results that was declared today. The people of Barpeta over joyed at the continuous success of the candidates of Barpeta district. Jugal Talukdar is the son of Koushala and Janak Talukdar and lives at Medhikuchi near Bhawanipur. Jugal is the student of Choukhuti Sankardev Shishu Niketan. He secured a total of 572 marks having letter marks in Eng 94, As-87, GSc- 99, GM- 100, SS- 95, and Adv. Maths- 97. He wants to join the science stream at higher secondary. His father wished him to admit in Bajali college. From remained at his grand parents house and his parents, his teachers and the family members are his source of inspiration. In his leisure time he use to read books and likes to play. He prepared himself for the examination by reading 6-7 hours in a day. He spoke that firm determination is the key to success. One should take the responsibility of the soceity oneself to lead a soceity. His parents are very much happy for their son's success.

Permalink Submitted by Ranjit Kalita on Sun, 30/05/2010 - 20:25
Dear Jugal,I will appreciate your success for reaching shines at the top most in the list of HSLC results. Congratulation to you on this achievement and keep up the good studies

13 Apr 2018 - 8:49pm | AT News
KOHIMA: The Naga People’s Front has alleged brazen favouritism of the PDA Government in Nagaland and vehemently condemned the shameless act of depriving the villagers their due share of funds from...