“Open the door and let the peace and cool wind come removing thunder i.e. all the evils from the society’’—said Dr.Binita Bora Dev Choudhury addressing in a discussion meet on “ Globalization, crisis in Assamese culture and its remedies”in the 10th Annual “Jatiya Chetana Divas” of all Assam Lekhika Samaroh Sammittee was held here at Barpeta on Tuesday in co-ordination with Barpeta district Lekhika Samaroh Sammittee at the premises of Barpeta Sahitya sabha Bhawan.

In her address Dr. Dev Choudhury also added that language is the source of a culture or a nation. The sweetness of the Assamese language identify the cultured mind of the Assamese people. But at present this sweet language of Assam going to be absurd one by the migration of foreign language and ill uses of the language in our day to day life. The marketing policy of the Multi national company in case of food items, dresses and other materials have completely broken the spine of our Assamese culture. After all the western culture had completely swallowed our culture in this age of globalization. As a result we have to stand in such a situation that we are going to be lose our own identity.

Earlier in the evening at 8.30 the Flag of the Committee was unfurled by Binita dutta, President, All Assam Lekhika samaroh sammittee followed by Smriti tarpan by Manorama das, ex-president, barpeta district Lekhika samaroh Sammittee. At 10 am a discussion meet on “Globalization, crisis in Assamese culture and its remedies” was held whereas Padmashree Hem Bharali was given away the “Kanaklata Award”. Hem Bharali in an address said that there is a great role of media to lead the society towards its right path.The discussion meet was conducted by Binita Dutta whereas Akshay Kr Misra, veteran journalist, littérateur, Barpeta and Dr. Binita Bora Dev Choudhury, Prof, Assamese Dept, Bajali College, Barpeta also took part. In this connection a souvenir was also inaugurated by Nirupama Misra which was jointly edited by Hiran Saikia Lahkar and Kanchan das, Barpeta Lekhika samaroh sammittee. 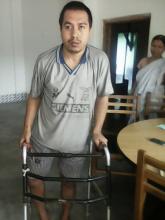 19 Aug 2012 - 8:24pm | editor
Two people died in West Bengal after the duo were pushed out of a Guwahati-bound train from Bangalore on Sunday. The gory incident took place in the wee hours between Belakoba and Raninagar railway...