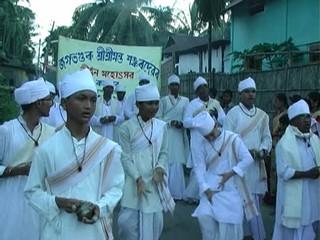 The death anniversary of Mahapurush Srimanta Sankardeva or the Kirtan Mahotsava was observed here at Barpeta Xatra traditionally. According to the tradition, the main Kirtan Mahotsava was held here today, but the satriya tradition had started before seven days of the main Kirtan mahotsava. According to that tradition the devotees of Brindaban Hati have to observe their own duty ( which is called here ‘paal’) and during these seven days before the main Kirtan Mahotsava they have to come to the Kirtan Ghar ( barpeta Satra) at night and ‘Bar Dhemeli”, ‘Gurughata’ etc( performance of Khol Badan). During these seven days according to the tradition along with the regular rituals at Barpeta Satra the Devotees have to perform ‘Naam Kirtan’, ‘Byah Kirtan’ ‘Ghosa Kirtan’ and ‘ Gayan- Bayans’ etc without any lapse and without breaking the ‘taals’ of these regular prayers. And the main day of Kirtan of Mahapurush Srimanta is usually observed here in the ‘ Sukla Dwitiya Tithi’ in the month of ‘Bhadra’ in Assamese calendar. At times there were also the tradition of ‘Naokhel’, but it becomes a HISTORY now.

Today in the morning after the regular prasanga(prayer) the devotees( pathak) sang two ‘Naam Chanda’ two ‘ saran chanda’ and lateron two ‘Ghosas’ of ‘ bastu Prakash’ and six ‘Ghosas’ of ‘Raas Leela ’which is found in our Naam Ghosa and Kirtan Ghosa by the Duo Mahapurushas. After than there were the tradition of distributing ‘Prasad’. And the gayan- bayans performed gurughata and then Bhojan Byebahaar was held. In the evening Ghosa Kirtan, Byah Kirtan, and at night Bardemeli was performed On the other hand ,for the Kirtan Mahotsava of Mahapurush Srimanta Sankardeva the devotees of Brindaban hati took out procession with xatriya tradition with gayan-bayan, Xatriya and group of Naam-Kirtan performed by the devotees and offered Karbhar( a kind of tradition at Barpeta xatra) at Barpeta satra. Mentionable that through this ‘Karbhar’ the devotees offered Rice, Gourd, salt, Mustard oil, and Dillenis Indica( a kind of sour)and those were distributed among the devotees of the satras of the hatis of Barpeta town. The performance of naam specially Thiya- Naam which is popular all over Assam and abroad naturally attracted the viewers and automatically bowed the heads of the viewers towards the devotion of Lord Krishna. Because these Thiyanaam is nothing, but in praise of lord Krishna. Thus end the Kirtan Mahotsava of Mahapurush Srimanta sankardeva.