Krishi Vigyan Kendra, Goalpara under the administrative control of National Research Centre on Pig, Rani (Indian Council of Agricultural Research) has taken up special initiatives for improvement of livelihood and nutritional security in Goalpara. The KVK has started a seed production programme for improved variety of Sesamum (var. ST1683) on 2nd April which is ready for harvest now. The expected production of the sesamum is 3 Tons which is two times of total seed requirement for cultivation in Goalpara district. Dr. Anubrata Das, Director National Research Centre on Pig, Rani, visited the farm and expressed satisfaction on the progress. During his visit he also attended three meetings with farmers in Matia, Darrangirri and Dhupdhara. He also addressed a group of thirty participants from different parts of Goalpara district gathered for a training programme on “Self employment by Goat rearing in Goalpara district”. He urged the farmers to come forward for commercial farming of goat. He said that necessary technical support will be provided by the KVK, Goalpara. Dr. Anubrata Das also had interaction with members of Abhijatri SHG, a women group from Kungkhrijani. The SHG is producing Jam, Jelly, Pickle and Squash after obtaining fruit preservation training from KVK. Dr. Das applauded the women group and said that such kinds of entrepreneurial activities will help women for self empowerment. Later he visited a site at Darrangiri and had a brief meeting with a farmer’s group. In the meeting he described the farmers the importance of pulse production for self sufficiency in food production and urged the farmers to go for pulse cultivation. At the end of the meeting he declared that a demonstration of pulse cultivation in 25 Bighas of land will be conducted by KVK in the site. A field day was also organised by KVK at Dhupdhara under the OFT on “Pitcher Drip Irrigation in banana” on the same day. Nearly fifty farmers attended the programme. The OFT programme was implemented in the farm of the Heuj Krishak Got at Dhupdhara. President of Heuj Krishak Got Mr. Uttam Boro shared his experience of the technology and expressed his satisfaction. ADO of Bikali Circle Mr. P. S. Bordoloi delivered the welcome address. Soil and water Conservation Engineer B. Kaman described the Technology and necessity for adoption in Goalpara district. Programme Coordinator of KVK, Goalpara Dr. U. K. Baruah interacted with the gathering farmers. Dr. Das chaired the programme and said that pitcher drip is a very effective measure to cope with dry spell for Banana cultivation in Goalpara. The programme ended with vote of thanks by Dr. Hitu Choudhury of KVK Goalpara.

Permalink Submitted by Dhananjoy Medhi on Mon, 24/08/2009 - 09:01
Its a bold step. information need updated. More area should be covered

Permalink Submitted by Premananda Nath on Fri, 09/10/2009 - 03:55
Very goon initiative taken by KVK.But Goalpara district having broad area from dhupdhara to bordering area of Bangaladesh,so KVK should cover interior villages in their projects for socio-economic development of unemployed rural masses.

22 Nov 2014 - 8:53am | J M Saikia
Several Assam taekwondo talents are shinning in the on going 60th National School Games in Jabalpur.Sansuma Narzary struck gold in U-62 kg in the U-19 category. Rajdeep Baruah has fetched bronze in U... 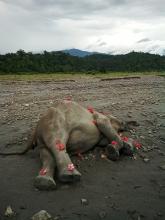 30 Jun 2016 - 9:39pm | Shajid Khan
A wild jumbo of around 15 years old embraced death at Kala river of No. 3 Bholatar  under Nonai Reserve Forest near Bamunjali TE on Wednesday night. A team of forest personals along with... 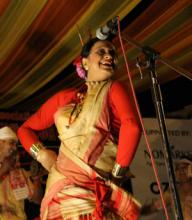