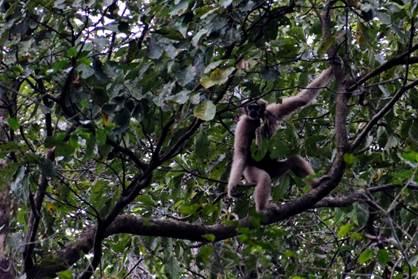 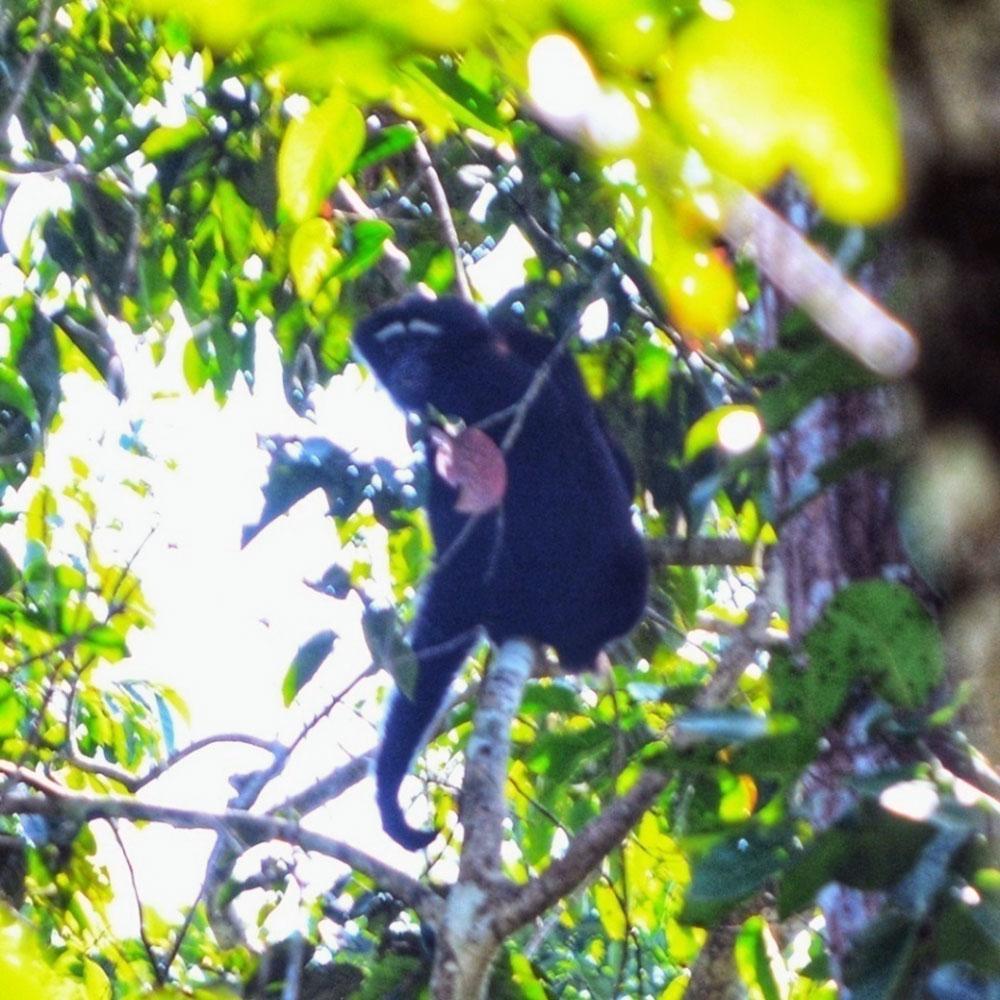 Gibbon is the only ape species found in Indian subcontinent. The uniqueness of Hoolock Gibbon is that it is found in only three countries in the world- South West China, North East India and East Bangladesh. Western Hoolock Gibbon (Hoolock hoolock) and Eastern Hoolock Gibbon (Hoolock leuconedys) are the two representatives of gibbons found in India. The third species Skywalker Hoolock Gibbon (Hoolock tianxing) is confined to South-Western China. Their distribution is restricted to the south bank of the Brahmaputra and East of Dibang river system in the northeast India. The western hoolock gibbon has the wider distribution of the two, occurring in seven states of the Northeast region, namely Assam, Arunachal Pradesh, Meghalaya, Mizoram, Tripura, Nagaland and Manipur. A new subspecies of the western hoolock gibbon has been described recently from northeastern India, which has been named the Mishmi Hills hoolock gibbon (Hoolock hoolock mishmiensis). Eastern hoolock gibbon has been reported in Arunachal Pradesh and Tinsukia District of Assam in North East India. As per WWF estimates, populations of western hoolock gibbons have declined by about 90% over the last 30 years, and it is now considered to be one of the most endangered 25 primate species in the world. In India, it is listed on Schedule 1 of the Indian (Wildlife) Protection Act 1972.

In a series of expeditions jointly carried out by Goalpara Photographic Society, Goalpara and Chandubi Festival Committee in association with local peoples have verified the existence of western hoolock gibbon in Chandubi forest of Kamrup district, Assam adjoining the hills of Meghalaya, confirming the North-Western most tip of the IUCN Redlist Map of Hoolock Gibbon in recent times. In 2018 a team of explorers led by Brahmananda Patiri, Saranga Dhar Rabha, Anamika Patiri, Nilkamal Rabha, Indra Narayan Koch, Biswajit Rabha and local peoples was the first of its kind to locate hoolock gibbon in Chandubi forest of South Kamrup in Assam. Though the team could not find hoolock gibbon in the dense forest, the team did necessary awareness on necessity of conservation of the endangered ape species for biodiversity.

Goalpara Photographic Society in close association with Chandubi Festival Committee has kept close observations since November 2019 with several search operations by Manas Lochan Das, Benjamin Kaman, Naren Das, Saranga Dhar Rabha, Abhilash Rabha, Jyotimoy Kalita, Moondwip Rabha, Indra Narayan Koch, Bishwajit Rabha, Ajay Rabha and Ambika Rabha etc. The teams could hear calls of Hoolock Gibbon from distance and estimated 3-4 families to exist in the deep forest, as well reported by the local peoples. Being monogamous, generally a family consists of a male, a female and the offsprings. On 8th December 2019 a five member team consisting of Benjamin Kaman, Saranga Dhar Rabha, Abhilash Rabha, Bishwajit Rabha and Ajay Rabha finally found one male western hoolock gibbon in the dense evergreen forest. Photographic evidence has been recorded in the camera of Abhilash Rabha for first time in the Chandubi forest, creating history and also recording evidence of its existence (Photo 1). Some wild unidentified seeds consumed by the Hoolock Gibbon were also observed. Markings of footprint and finger print are also recorded where the Gibbons collect their necessary drinking water. The recorded video shows the Gibbon’s fear and fast escape on sight of human, which indicates its threat in the territory. In the year 2020, more numbers of Gibbons were sighted specially during the COVID lockdown period. On 24th December 2020, a three member team comprising of Benjamin Kaman, Matiram Rabha and Bikul Boro sighted a pair of Western Hoolock Gibbon for first time and the first photograph of a female gibbon was recorded in the camera of Benjamin Kaman (Photo 2). Latest assessment indicates presence of about eight families of gibbon the forests of Chandubi area.

The joint expedition teams also found Great Hornbill, about 20 orchid species (including few uncommon species), huge varieties of plant species (including Tacca chantreiri), about 20 species of butterflies and uncommon insects (including Macarantha acruata and Nephila pilipes spiders) have also been recorded and under various stages of identification, some of which are not much commonly reported in the state in recent times. Extensive investigation and adequate conservation measures are necessary to preserve the rich biodiversity of Chandubi forest in South Kamrup of Assam. Assessment of the unexplored resources may enrich the Biodiversity pool of the state to a great extent.

It is worthwhile to note that special conservation measures of gibbon have been initiated in some sanctuaries of North East India including Hollongapar Gibbon Sanctuary in Jorhat, Assam, Trishna Wildlife Sanctuary in Tripura, Ntangki National Park in Nagaland, Namdapha National Park in Arunachal Pradesh and  Sonja Wildlife Rescue Centre in West Garo Hills, Meghalaya. Another wonderful example of Gibbon conservation and Gibbon based tourism has come up in Tinsukia district of Assam. The villagers of Barekuri village of Tinsukia started conservation measures of the endangered species and started being friendly and feeding them. Now, the Hoolock Gibbons of that area are no more afraid of humans and would accept food like Banana etc from the villagers. This has turned into a rural tourism and becoming destination of foreign tourists also apart from local tourists, since it was already mentioned above that Hoolock Gibbons are found in only three countries in the world.

In a similar way, the villages of Chandubi may also start some initiative in this regard and upgrade the image from just a popular picnic spot to a wildlife tourism hub with special focus on the endangered Gibbon. However, Government and other stakeholders need to take some urgent measures for safety and sustainability of the Gibbons and other flora and fauna. Chandubi mostly popular as a picnic spot about 40 KMs from Guwahati airport with its giant lake,  a number of small and medium waterfalls; and forested plains and hills is losing its rich biodiversity everyday because of lack of proper conservation initiatives from authorities and lack of awareness among the peoples residing nearby. Upliftment of Chandubi forest to a Gibbon sanctuary or National Park will ensure conservation of the endangered Western Hoolock Gibbon in this part of the state along with conservation of existing rich biodiversity. Enhancing the image of Chandubi to a wildlife tourism hub by declaring and conserving as a sanctuary will also ensure upliftment of socio-economic condition of the peoples through rural tourism avenues, homestay etc. This will help in long term sustainability of the ecosystem. This initiative will also ensure maintaining ecological balance of the ever expanding and depleting environmental parameters of greater Guwahati city in future.

22 Oct 2011 - 1:15am | DigantaTalukdar
To enhance the analytical skills for Research works through SPSS (Statistical Package for Social science) which will not only facilitate the Research Scholars in completing their thesis, but will...

7 Jun 2015 - 9:01pm | AT News
Arunachal Pradesh Governor Jyoti Prashad Rajkhowa on Sunday stressed age old bonhomie with Assam to end the interstate problems confronting both the states.   According to a Raj Bhawan...