Guwahti: the city of death

Normal life of Guwahati, the gateway of North-east India, was once again shattered by a powerful blast. It is the sixth blast in the city this year. The Guwahatians were greeted by a blast in the 1st day of the year. Our own elected representatives were failed to take a decisive stand against this madness of terrorism. As the election is near every political party is busy making advantages out of these. Who will ensure the safety of common people? No one knows when the next blast will take away more lives. The role of the ruling government in protecting the life and property of its people is not satisfactory. Some acts of bravery of our police force are like picking up vehicles from no parking place, clearing up the traffic when the convoy of our Chief Minister passes, penalizing the pillion rider for not wearing helmet, etc. But they have failed to prevent one single blast. It is true that it is impossible to check each and every individual but the intelligence wing of our state police atleast should have some leads about such blasts. Now a days when someone leaves his home in the morning, he is not sure whether he will be able to return home safely. The Home Minister of our state who also happens to be our Chief Minister once said that even New York was hit by terror acts. But Mr. Home Minister, after 9/11 the security measures were beefed up to such an extent there is no repetition of 9/11. But in our case after 30/10 blast of Ganeshuri many announcements were made but the situation remains the same. Its an appeal to our elected leadership please take some concrete measures to protect the lives of your electorates.

Permalink Submitted by Gitanjali on Sun, 19/04/2009 - 17:24
Can we please do a spell check before we put it up online for the whole world to see? However grave the content might have been, such errors (typos) are unpardonable as they project our casual attitude towards everything. 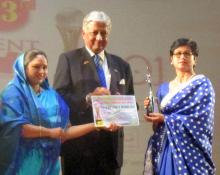