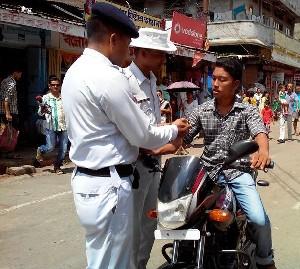 Following the lines of Munnabhai’s Gandhigiri Golaghat Traffic Police (GTP) has come up with a unique way to prevent traffic offenders from parking their vehicles, two and four wheelers in no parking and from treading into no-entry zone.   The traffic police approached the offenders with a “Pan Tamool” requesting them to park their vehicles in their assigned places. The offenders were surprised and embarrassed at the same time when the traffic police offered them a “Pan Tamool” in place of slapping a fine.

As informed by Sahabuddin Borbhuyan, the In-Charge of GTP, the idea was the brain child of a journalist which was later adopted by the traffic police. Initially this program is confined to offenders violating parking rules but gradually it will bring all other traffic offences under the drive. “People were mostly non co-operative as far as fines are concerned but today, the offenders were highly embarrassed and promised never to repeat the same in the future and had received positive response and co-operation from the people. This move of Golaghat Traffic Police is set to continue in the coming days also” Borbhuyan told Assam Times. Meanwhile, this never before and unique venture of Golaghat Traffic police has won appreciation from all quarters.

The vehicular traffic of the town is on the rise with 400 Magics, 80 Wingers and 70 Trekkers in Golaghat town but there are only 3 recognised parking lots apart from Dhodar Ali that runs through Chowk Bazar which also served as a parking lot. As per the records of District Transport Office, there are more than fifty thousand registered vehicles in Golaghat. Moreover GTP is facing severe man power crisis and it is functioning with total 21 personnel including one Traffic In-charge. The force also doesn’t possess its own four wheeler and has to operate with only two motor bikes.

It is only due to shortage of manpower, we could not provide on duty traffic personnels near school and colleges though there has been a demand for deployment of traffic police in such places. In the absence of a departmental vehicle the traffic personnel many a time are delayed in reaching a particular accident site, Borbhuyan said.

Conference on North East at JNU