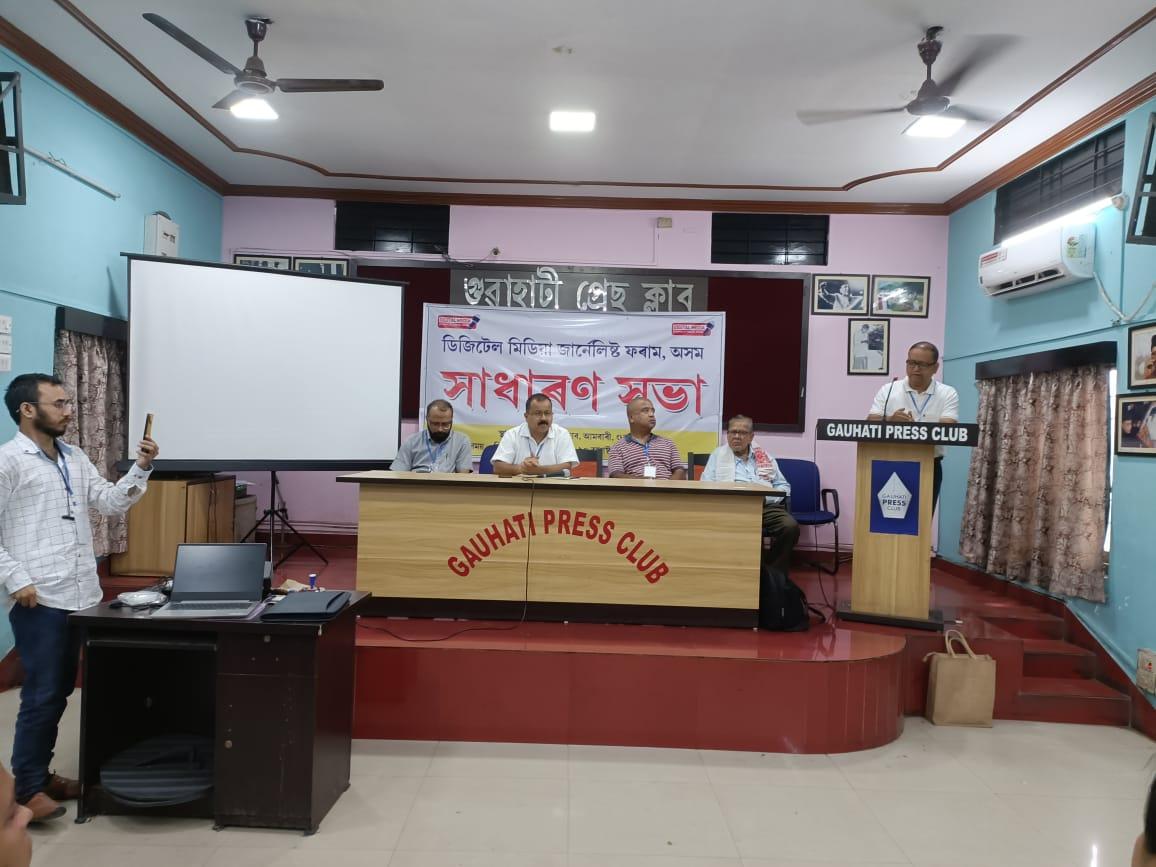 Guwahati: The newly formed Digital Media Journalists Forum, Assam  held a general meeting at the Guwahati Press Club on Wednesday.  The meeting was chaired by the president of the Convening Committee of the Digital Media Journalists Forum and presently editor of The Cross Current, Bedbrata Bora. Advisor to the Forum and former residence editor at The Telegraph, Pranab Bora spoke about various legal problems faced by digital media journalists. In addition, senior journalists Amal Dutta and Bidhayak Das gave speeches on the importance and role of digital media in the present day. The meeting was attended by journalists from various digital media outlets from eight districts of the state..

The meeting also discussed in detail the  proposed  Digital Media Act of the Ministry of Information and Broadcasting, Government of India.  Current Trend Assam’s Dhruvajyoti Dhanantari also Secretary of the forum, explained various technical aspects of digital media. The session was chaired by News ASN’s Managing Editor Nabajyoti Kalita also General Secretary, Convening Committee of the Digital Media Journalists Forum. The General Meeting adopted several resolutions to further dynamize and strengthen the Digital Media Journalists’ Forum, Assam.  The proposal was adopted to form a full-fledged statewide committee through a general conference in February next year to establish within one year of its establishment.  The Chief Minister Press Cell, CMO and the Assembly to be informed about digital media journalists forum for invitation to the official government press conferences and other proceedings, members of the forum to be informed about the laws applicable to digital journalists along with Press Council of India (PCI) guidelines, set up a legal cell to provide assistance as and when needed, apply to the Directorate of Information & Public Relations, Stationeries and Printing, Government of Assam for DIPR and DAVP advertisements to digital media operating under standard guidelines. The meeting also discussed the establishment of an office of the Digital Media Journalists Forum in Assam in Guwahati in the coming days, recruitment of new member individuals and organisations, bringing together digital media journalists from different districts of Assam and establish organizational relation with national digital media journalists organisations.

‘Digital Media Journalists’ Forum, Assam organised its first general meeting at Guwahati Press Club on August 10, 2022 to discuss the challenges and opportunities of digital media in the state and passed an important resolution as stated above.  After its formation meeting on 15th February 2023 at the same venue, the convening committee under the leadership of Bedabrata Bora and advise of Pranab Bora met several times virtually to make a draft of 'Publishing Standards by Digital Media Organisations and Reporting Ethics’ which is being circulated among the members and senior journalists to final. Since the organisation shall be a self-regulated independent body, its financial aspects and operations angles were also discussed in these virtual meetings. "In the next six months, we plan to reach out to all the districts of Assam and the maximum digital media house and hold a General Conference to form a statewide committee in Feb 2023’, said Babul Gogoi, Founder & Managing Editor of Assam Times a community news media service from 2007 also treasurer of the forum.

The conference has been called at a time when the government is mulling controls for the largely unregulated sector. The Forum stated it has been working to ensure the security and rights of digital media journalists and workers. It is high time for this digital news media to be recognised as a valuable contributor, feels the Forum. Its advisor Pranab Bora, Editor in Chief of News File said, ‘Digital media journalists and workers are facing challenges in matters of security and rights, with the government often taking an indifferent view. Digital media is being favoured by a new generation of tech savvy journalists and lot many have successfully created niches and many established journalists as well as upcoming ones have joined digital media and are working relentlessly to publish important news, in spite of the challenges faced by this form of media.  We will endeavour to set up a digital media organisation that will have a self- regulatory charter and good interfacing with the government within one year of its foundation so today’s general meeting resolved to organise a General Conference of the forum next year in february’. Nanda Kirati Dewan, an international award-winning senior community & digital journalist felt that the forum should train digital journalists from basic standards of publishing to handling sensitive matters and conflict reporting and ensure that they are not criticised, the way they are now. Forum’s founder executive member Dewan further added: "Forum would mean a group for discussion and might limit our area of operations so I would request the forum to rename it to the Digital Media Council of Assam (DMCA) affiliated to Press Council of India or the Digital Media Press Club, Guwahati affiliated with the prestigious Guwahati Press Club." The conference today discussed many important matters related to digital media, including the Information Technology Act, which the central government has been proposing to rein in the digital media. Several digital news portals from eight districts of Assam and the journalists engaged in digital media of the state attended the said general meeting.

11 Jan 2010 - 4:06pm | Stuti Goswami
Poetry is the spontaneous overflow of powerful emotions recollected in tranquility, so said William Wordsworth. It is “…a deal of joy and pain and wonder, with a dash of the...

12 Jun 2018 - 5:16pm | Prantik Deka
Shankar Borua is an independent filmmaker from Assam who has continued making cinema with a distinct sensibility and incorporates the voices of the many communities that make up the State. Even...