Nabajyoti Kalita set the agenda for a meeting of journalists in Guwahati, and ETV Bharat's Assam Bureau Chief Nayan Jyoti Bhuyan explained the agenda to discuss safety and security of digital journalists. Senior and new journalists placed their views along with opinions from observers. Editor in chief of community news media Assam Times Babul Gogoi made a detailed presentation on 'Safety & Security, Registration & Recognition and Self Regulation of Digital Journalism' where he outlined recent incidents about public threats to digital journalism from constitutional office bearers, police and mob atrocities, and appealed for formation of a forum to continue discussion about it and form a digital journalism organisation which can register digital media houses and approve accreditation of digital journalists—also provide legal aid as required.

Thank you, great honour to be

Permalink Submitted by Ramesh Bastola on Wed, 16/02/2022 - 20:23
Thank you, great honour to be a part of said meeting and one amongst the designated member of the forum.

15 Nov 2013 - 4:05pm | AT News
In a historic judgment, the Jorhat sessions court on Friday ordered life imprisonment for a surrendered Ulfa man in connection with a sensational murder case in the district. The court passed the... 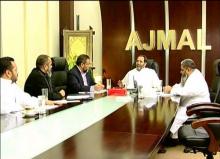 17 Oct 2010 - 3:42pm | Parimita Barooah
There are some things that add spice to life. Perfumes are one of them. They are associated with elegance, culture and wellbeing. It is one of those products that may influence our emotions....