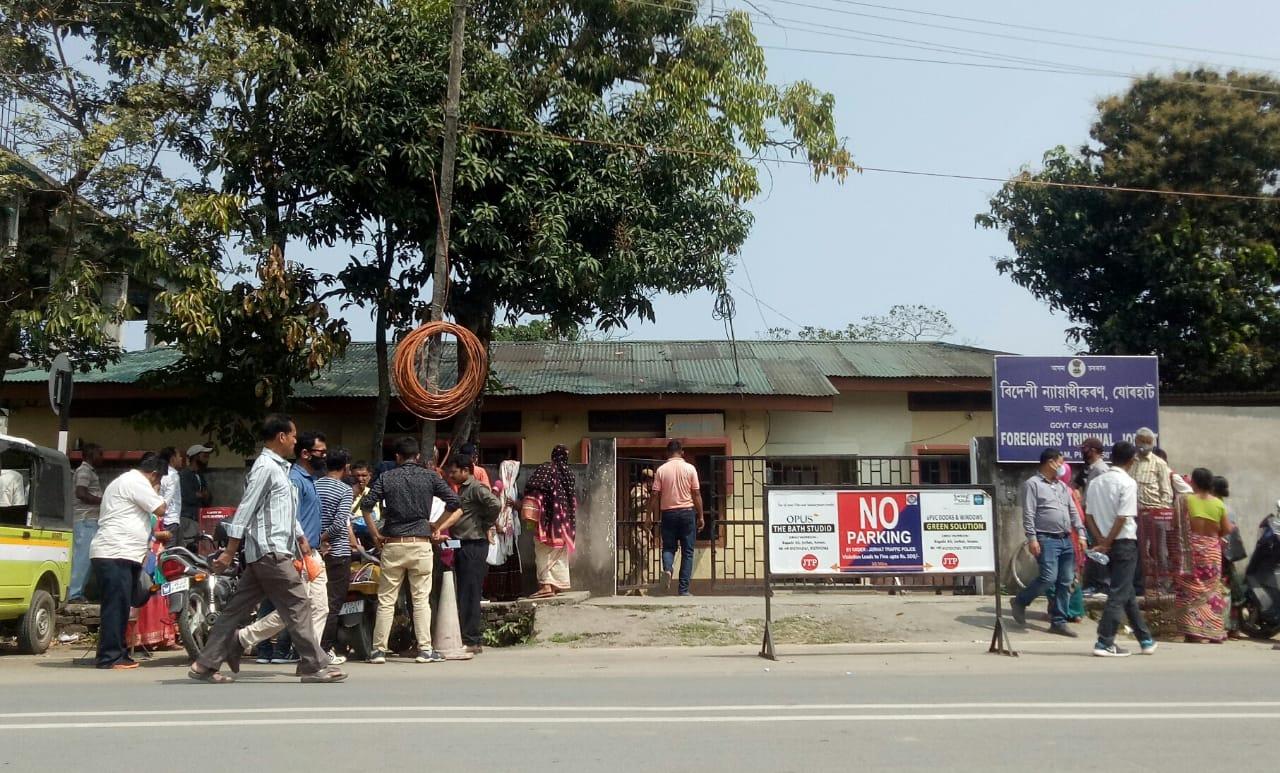 Jorhat: Saturday:  Following Government of Assam's cabinet decision to withdraw D Voters cases filed against the Gorkha community, Department of Home and Political Affairs, Government of Assam had issued a circular to Director General of Police , Assam Police and Special Director General of Police (Border), Assam Police with copies to all relevant authorities to withdraw cases pending against Gorkhas in various Foreigners Tribunals ( FTs) in Asaam, the  Jorhat FT recently issued common order stating that these cases are disposed off on withdrawal and that the proceedees have not migrated from 'Specified Territory' means Bangladesh and they are not Bangladeshi as alleged in the case by Border Police.

The common order dated 10th September 2021 excerpts reads as follows ' It is relevant here to mention that in this connection the Secretary to the Government of Assam, Home & Political Department, Dispur, Guwahati has made a communication vide Ref No. PLB. 324/2018/186 dated 17th Aug 2021 passing an instruction 'to withdraw cases through Assistant Government Pleader in respect of members of Gorkha community where the cases have been referred to Foreigners Tribunals.'

As per the aforesaid communication, the  Superintendent of Police (Border) Golaghat in an exclusive communication to FT Jorhat via memo GLT(B)/FT/Gorkha/2021/792 dated 9/9/21 seeking liberty from the Tribunal and permitting the refferal authority to allow withdrawal of the cases of members of the Gorkha community of Golaghat district pending against them before this Tribunal". 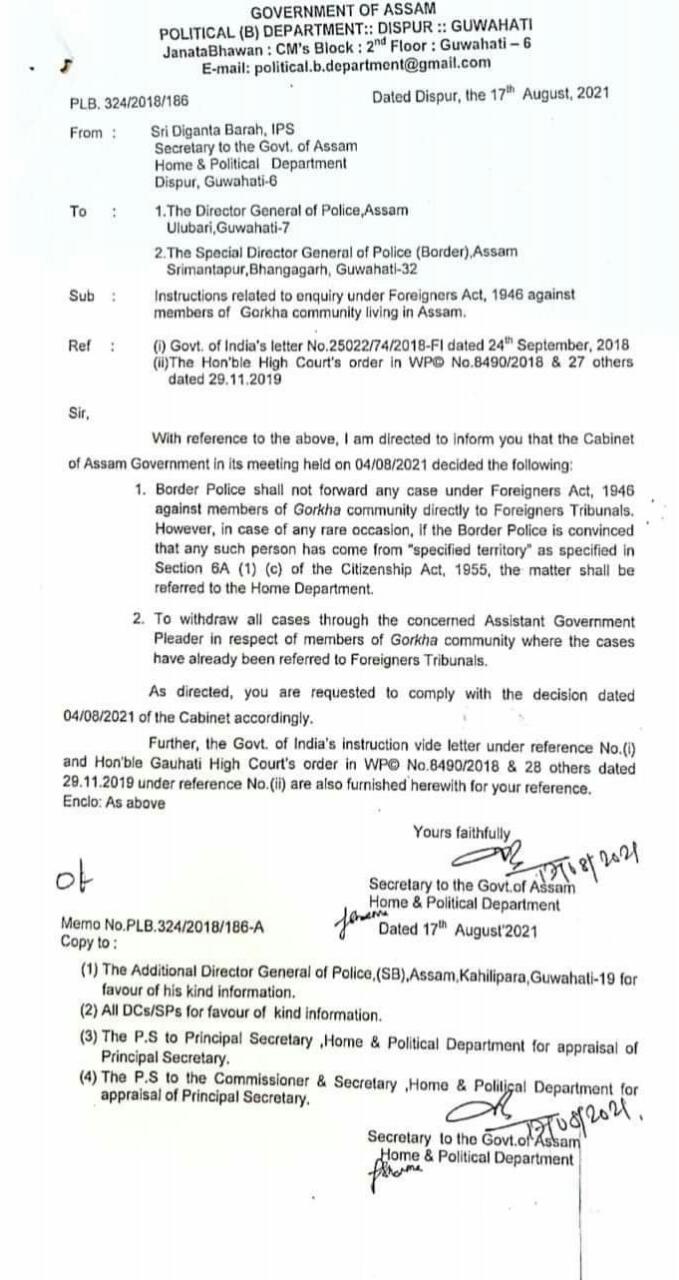 It further reads that on inquiry it was found that  these proceedees belonged to Nepali speaking Gorkha community and have not stated any migration place so it is clearly evident that they never migrated from the 'Specified Territory' which means  Bangladesh as per the Assam Accord 1985 and are not illegal foreigners Bangladeshi as alleged.

Hon'ble Member FT Jorhat Shri N N Jha in his common judgement said, "For the aforementioned, prayers have been made vide letter dated 9/9/2021 of the SP(B) Golaghat is hereby allowed and accordingly, the instant reference proceedings pending against the members of the Gorkha community of Golaghat district are hereby withdrawn. This is to inform all concerned and all the above proceedees thus disposed off on withdrawal".

Reacting to the development, Prem Newar, former Central Vice President AAGSU Prem Newar, who has been leading Gorkha D Voter cases in Golaghat since 2010 said, ' This is the second common order from Jorhat FT since the NRC process started. This result of continuous efforts by Gorkha civil society organisations Bharatiya Gorkha Parisangh (BGP), All Assam Gorkha Student Union (AAGSU), supported by Assam Gorkha Sammelan (AGS). On an earlier occasion Advocate of Gauhati High Court and president of BGP, Assam had argued on behalf of the Gorkhas at Jorhat FT along with a team of advocates. The Common Judgement Order of 22 proceedees dated 18th September 2018  is read as one of the landmark judgements in Assam in the D Voters Foreigners Tribunals case.

He further said that Gorkha youths, AAGSU leaders and D. Voters crusaders across the state should follow the steps of Golaghat district and ensure that Gorkhas D Voters cases pending before various Foreigners Tribunal (FT)s of Assam are withdrawn immediately. 33 cases pending before Jorhat is officially withdrawn and we are now working to remove D from Electoral for those cases who weren't served notice or tried at FT.

Bhakta Limbu, senior vice president of Bharatiya Gorkha Parisangh , Upper Assam region a D Voter crusader since 2016 said, ' After the Assam Govt Cabinet decision and communication from Home and Political Department, a delegation of Gorkha CSOs lead by Prem Newar met Deputy Commisioner (DC) and Superintendent of Police (SP) to immediately issue  necessary instructions to officers and department concerned and take steps withdraw cases pending at FT and arbitrarily marked D in Voter Lists. Our stance has been vindicated however we are yet to receive any notification from the Election Commission of India or the Chief Electoral Officer (CEO) Assam in this regard".

Regarding the same, Prem Newar added that he has collected  385 D Voters marked voters in the recent Draft Electoral Rolls of Golaghat district, meaning while on anonymity FT Jorhat officials informed this correspondent that at least 500 cases have been disposed off on withdrawal since September 10th. The District Electoral Officer (DEO) and DC Office's Election branch are tight lipped on this matter. This is a developing story, Assam Times will follow up cases with respective FTs, DCs, SP(B)s and also CEO, Assam. 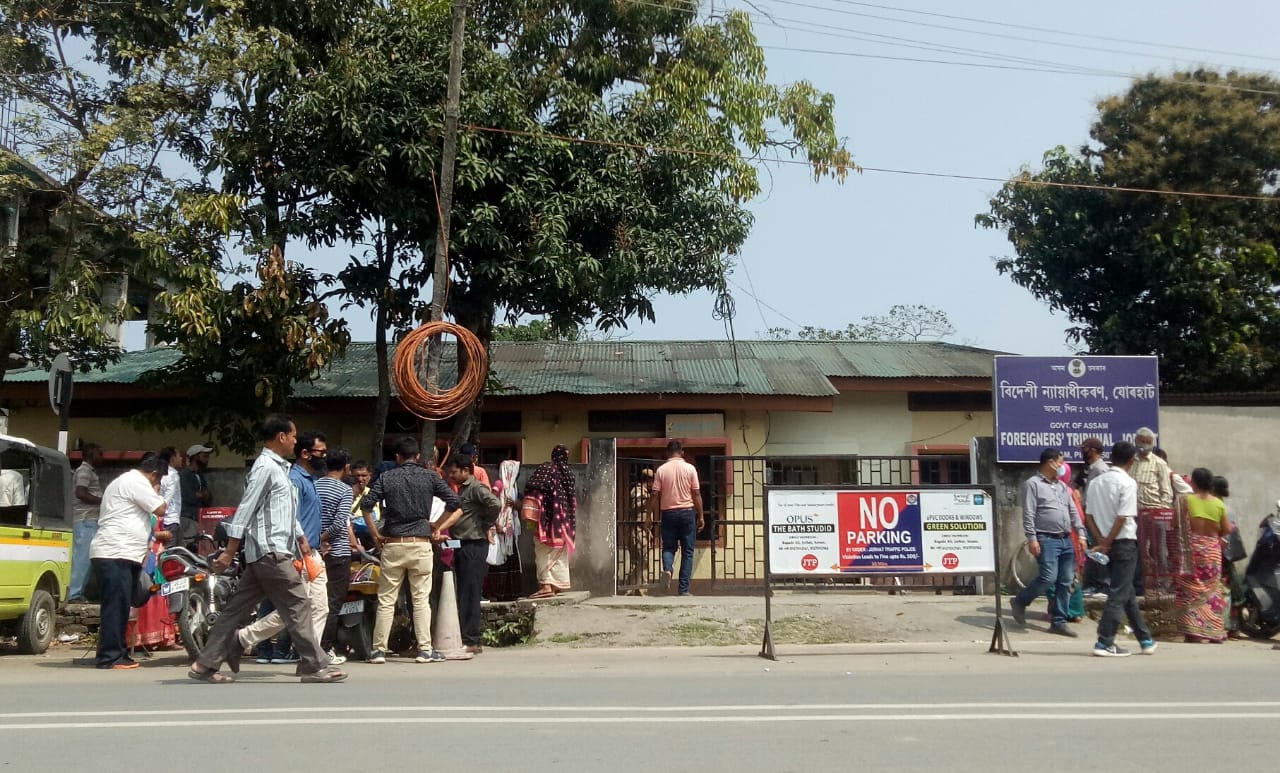 29 Jul 2015 - 7:02pm | Hantigiri Narzary
A ten day workshop on Satriya dance and Borgeet training session is being organising at Kokrajhar Naamghar in Kokrajhar since July 21 to July 31.Over 30 participants from Kokrajhar town and its... 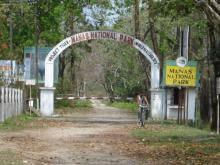