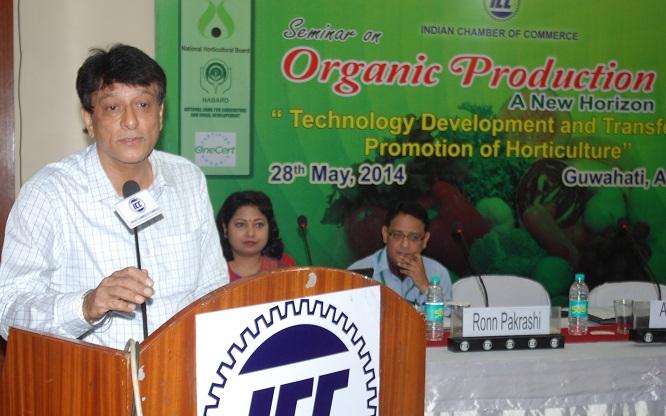 The need of the hour is the technology and knowledge based farming to ensure Organic productions. This was more or less of what the experts said at a seminar in Guwahati on Wednesday.

The experts in the seminar on organic production organized by Indian Chamber of Commerce (ICC) in association with National Horticulture Board (NHB) and supported by NABARD dwelt at length the knowledge based farming in the north eastern region.

In his address, additional chief secretary V K Pipersenia said that Assam was implementing the 3 phase program to generate awareness on organic farming.

Central Institute  of Horticulture director Dr. Lallan Ram who attended the seminar spoke on identifying the economically viable corps to be grown and both forward and backward linkages.

“Sikkim has ensured growth trajectory in Organic production. Rest of India should follow Sikkim the only state that will be 100% organic by 2015 to make India an organic nation,” he said.

Indian Chamber of Commerce joint director Madhuparana Bhowmick outlined that organic farming has emerged as a major thrust area in agriculture over the past few years throughout the globe.

1 Feb 2015 - 10:50am | AT News
The Central Bureau of Investigation probing the Saradha scam is producing Matang Sinh before the special court in Kolkata on Sunday a day before the former Union minister was arrested in connection...

13 May 2015 - 7:34pm | AT News
The Gossaigaon unit of People’s Co-ordination for Democratic Rights (PCDR), staged a 3 hours protest dharna infront of Gossaigaon Civil SDO office on Wednesday highlighting a slew of demands.These...