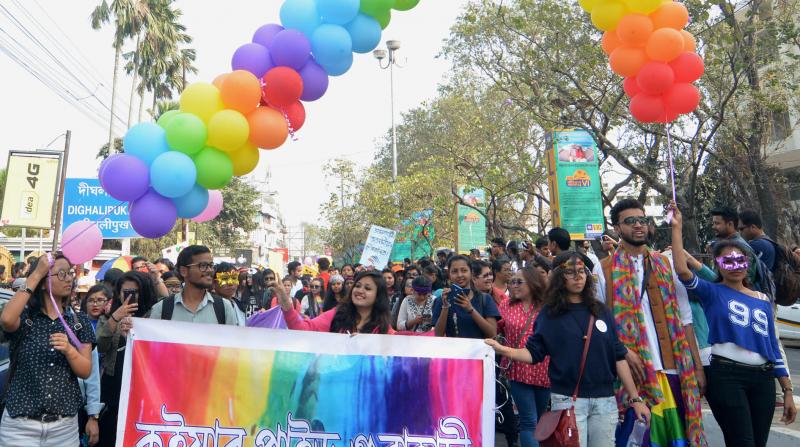 Guwahati marked its fifth consecutive Pride march on February 11, 2018. Processions, demonstrations and cultural rallies have always been part of youth events in Assam. To be able to include people from diverse students groups, women’s groups, media groups, children and adults has been a great achievement of Guwahati Pride march. This year the participation from youths from various institutions has been unprecedented. Xukia is a queer collective whose initiatives in creating awareness, association and activism around the issues related to Pride has been exceptional. Glaring shutters, curious bystanders, blank stares of commuters in buses and private vehicles couldn’t stop the enthusiasm of the Pride participants. Groups and individuals from across North Eastern States, Indian states and other parts of the world like Australia also participated in this year’s Pride. More than 500 people walked together from Dighalipukhuri towards Pan Bazaar and then around the High Court and reassembled back near Dighalipukhuri. Mobile, video, audio and camera shots kept reminding the Pride participants as the subjects of social solidarity.

History of Pride dates back to 1969 in New York to protest against the stonewall riots. In fact June 28, 1969 is the dark moment of the riots which led to the Pride month of June in the west. It marks the dissent against normative structures which limit human aspirations and expression of sexual diversity. In the current context Pride has become a platform to resist injustice, inequality, exploitation, domination and discrimination of any form. In the pan Indian context, Dalit rights activism has also strengthened the Pride movement. Merging of the blue flag with the rainbow flag marks the convergence of such movements. Pride is a moment of protest but in Guwahati particularly, it has been a moment of celebration of diversity and differences which seems to give space to invisibility and visibility both for diverse people and groups. It brings people, causes, professionals, researchers, communities together.

Young people with masks, some without masks, people in traditional wear, some walked with modern outfits and many walked in gender neutral attires. Diversity was displayed through the flags, placards, slogan shouting and drum beats. What seemed like a peaceful joyride was indeed a demonstration of social solidarity towards democracy, social inclusion, diversity and dignity as a human being on the street without any layers or label of stigma and discrimination. In fact academia has opened up diverse perspectives on the understanding of the entire discourse on queering and human sexuality. Pride walk also is a way to share one’s struggles, stories of hope and resistance which adds value to human endeavours. I was very happy to see the participation of diverse young professionals, students, social scientists and social workers from across the state of Assam. At the same time, I saw media persons hounding people walking in the Pride march for photographs, stories, profiles and special bytes. Some cautious onlookers were walking outside the centre of the Pride march almost highlighting their ‘safe-distance’ from the participants. I received some messages and calls prior to the Pride whether people can join or not? Some also enquired if they can get their kids to the Pride march or not. A few of them came and participated throughout the programme both with and without their children. While walking along the route, organisers made sure that people walked on a particular side of the road without blocking traffic. Even such minor restrictions seemed very linear for a queer Pride march. Safety of the participants was very crucial for the organisers but every person who joined the Pride march must be aware of the consequences in a protest march. In a world of digital media, one must ensure right to privacy for each and every Pride participant. Not every closet has a key, not every mind is open and not every Pride is joyful.

10 May 2014 - 9:42am | AT News
City police have arrested two youths from the Gauhati Medical College Hospital premises charging the duo with misbehaving with a lady doctor and offering incestuous proposals on Saturday.The incident...